LOS ANGELES, California (CNN) -- More than 250 inmates were injured in a riot that erupted overnight at the California Institution for Men in Chino, a spokesman said Sunday. 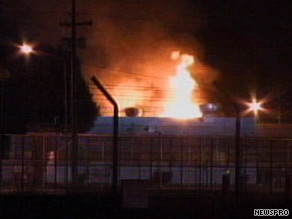 Flames leap from a housing unit at a prison in Chino, California, on Saturday night.

None of the facility's employees was hurt in the melee, which broke out at about 8:20 p.m. Saturday at the Reception Center West facility, Hargrove said. Guards used pepper spray, "less lethal force, and lethal force options" to regain control by 7 a.m. Sunday, he said.

The scene of the violence was the medium-security housing facility with seven units, each of which houses about 200 inmates, he said.

Some 80 officers responded to the riot, during which a housing unit was heavily damaged by fire, he said.

The institution was placed on lockdown pending an investigation into the cause of the fighting, and visiting privileges were suspended.

Hargrove said several other prisons in southern California were placed on lockdown as a result of the riot at the Chino facility and the possible need of reallocating prison staff to Chino.

Aref Fakhoury, acting warden for the California Institution for Men, said police departments from the cities of Chino, Chino Hills and Ontario, and the Chino Valley Independent Fire District aided in quelling the violence.

The inmates' injuries ranged from stab wounds and slashes to head trauma, Hargrove said. Some were considered life-threatening.

Hargrove said inmates used "weapons of opportunity," such as broken glass during the riot.

Images taken from the scene showed flames coming from the building as a helicopter hovered overhead.

A similar riot broke out in December of 2006, Hargrove said.

Chino is located about 35 miles east of Los Angeles.

All About Prisons • Los Angeles