NEW YORK (CNN) -- Five Italian tourists visiting New York from Bologna are among the nine victims believed killed Saturday in a midair collision of a sightseeing helicopter and a single-engine plane over the Hudson River, a law enforcement source said. 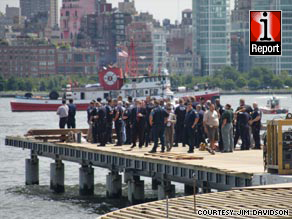 First responders gather on a pier after a plane and helicopter collided Saturday over the Hudson River.

The tourists, who apparently died with the chopper's pilot, were part of a group of 12 visiting the United States, the source said. The helicopter was operated by Liberty Helicopter Sightseeing Tours.

The bodies of two adults and one child were recovered after the collision, which occurred around noon over the Hudson between New York and Hoboken, New Jersey, authorities said.

The child is believed to be one of the three people on the plane, a single-engine Piper PA-32 Saratoga that took off from New Jersey's Teterboro Airport, authorities said.

A source involved in the investigation identified the pilot and owner of the plane as Steven Altman, whose brother Daniel and nephew Douglas also were among the victims.

The two adult bodies, discovered underwater, are believed to be two of the Italian tourists aboard the helicopter, the law enforcement source said.

Helicopter wreckage was found in about 30 feet of water, while the plane is believed to be near the midchannel point of the Hudson in deeper water, the source said. A side-scanning sonar is being used to pinpoint the plane and has identified a possible third debris field, the source said.

All nine people in both aircrafts are thought to have been killed in the collision, New York Mayor Michael Bloomberg said.

See where the collision occurred »

"There was an accident which we do not believe was survivable," said Bloomberg, noting that the search for survivors had become a recovery mission.

A temporary flight restriction over the rescue area -- about three nautical miles around and 2,000 feet up -- was put in place, a Federal Aviation Administration spokeswoman said.

A witness told investigators he saw the airplane approach the helicopter from behind, Hersman said.

The witness said the plane's right wing made contact with the helicopter, an American Eurocopter AS350 operated by Liberty Helicopter Sightseeing Tours, Hersman said.

View images from the scene »

Another Liberty pilot who was refueling at a nearby heliport told NTSB investigators that he saw the plane approach the helicopter and tried to warn the helicopter pilot, but got no response, Hersman said.

"This is a VFR corridor -- that means Visual Flight Rules prevail," Hersman told reporters late Saturday. "You are supposed to be alert and see and avoid other aircraft in the vicinity." iReport.com: Police search for debris

Witnesses reported seeing debris flying from the helicopter as it crashed.

The helicopter wreckage has been found, but the search for the plane, single-engine Piper Saratoga PA-32, will continue Sunday morning, Hersman said at a riverside news conference.

Witness Arnold Stevens said after the plane had a wing sheared off, it began "corkscrewing" into the water. The helicopter "dropped like a rock" after the collision, which happened about noon.

See a series of photos from the scene »

Radar contact was lost with a small plane this morning believed to be the aircraft in the crash, FAA spokeswoman Arlene Salac said.

Ben Berman, a former investigator with the National Transportation Safety Board, said if the helicopter fell straight down, it's likely there was a rotor failure.

Scott Schuman was with his grandparents on the Hoboken side of the river when they heard a loud bang.

"The plane was kind of whirlybirding its way down, brown smoke coming out the back of it, and it crashed into the water. Then a few seconds later the helicopter with debris falling off of it also hit as well," Schuman said.

"It was a scary sight," he added. iReport.com: Were you there? Send images

He said some of the debris fell in Hoboken, and "we covered our heads."

Asked if he had seen anyone in the water, Schuman replied, "I have not seen anything, but judging by the impact when the plane and the helicopter hit, it would be very unlikely for a positive outcome."

Hoboken Mayor Dawn Zimmer called on witnesses who filmed or photographed the incident to come forward.

"It would be extremely helpful to have that footage," she said.

The busy airspace surrounding New York's Manhattan island has been the site of several aeronautical mishaps in recent history.

Earlier this year, a US Airways plane with 155 people on board ditched into the Hudson, apparently after striking at least one bird upon takeoff from New York's LaGuardia Airport, officials said.

Capt. Chesley B. "Sully" Sullenberger's landing, which resulted in no deaths or serious injuries, was captured on closed circuit television.

In 2006, Yankees pitcher Cory Lidle and his flight instructor were killed when the 34-year-old ballplayer's plane crashed into a high-rise apartment building near the East River, city officials said.