NEW YORK (CNN) -- The husband of a woman who authorities say was impaired by marijuana and alcohol when she caused a head-on collision that killed eight people, including herself, has rejected claims of substance abuse by his wife. 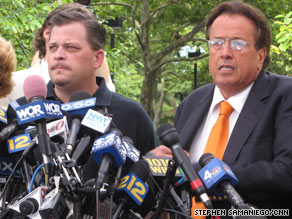 "I've never seen her drunk since the day I met her," Daniel Schuler, referring to his wife, Diane, said Thursday. "I'm not angry at her. I'd marry her again tomorrow."

Accompanied by his attorney, Schuler held a news conference to counter claims by authorities, who said Tuesday that Diane Schuler, 36, had a blood alcohol level of 0.19 percent -- more than twice the legal limit for drivers -- and had marijuana in her system when she drove a minivan the wrong way on the Taconic State Parkway and ran head-on into an SUV.

Three adults in the SUV were killed in the July 26 collision, as were Schuler and four children -- her daughter and three nieces -- who were in the minivan. A fifth child in the minivan, Schuler's son, survived.

On Thursday, Dominic Barbara, Daniel Schuler's lawyer, cited a list of medical aliments inflicting Diane Schuler before the crash. She apparently had a tooth abscess for two months, diabetes at "various levels" and a mysterious lump on her leg that seemed to move, he said.

"I think she had a stroke," said Barbara, who admitted he had no evidence to support his claim. "And I think from the stroke came all the other issues of what happened."

The crash happened about 30 miles north of New York after Schuler and the children left a campground where her family had stayed.

Barbara said nobody at the camp saw Diane Schuler with alcohol. He said investigators interviewed nine people who spoke with Diane Schuler before she embarked, and those people did not smell marijuana or alcohol on her breath.

"Actually, it was the opposite," Barbara said. "She was happy. She was talking to people."

Authorities said Tuesday that a broken vodka bottle was found in the minivan after the crash. Barbara said he couldn't explain the bottle, but he said, "Something had to have happened."

Daniel Schuler and his lawyer said they have yet to decide on whether they want another autopsy.

"There's no way she'd do this," Jay Schuler said. "She was responsible."

The statements by Schuler and his attorney differed from the toxicology report released Tuesday by the Westchester County District Attorney's Office. Besides the 0.19 percent blood alcohol level and marijuana, tests showed Diane Schuler had 6 grams of alcohol in her stomach that had yet to be metabolized, according to Maj. William Carey of the New York State Police.

Meanwhile, an attorney representing families of two SUV occupants who died in the wreck said a lawsuit is likely.

"If I could prognosticate, it appears that there will be a civil suit," said Marshall Nemark, an attorney representing the families of Michael Bastardi and his son, Guy Bastardi, who were killed in the crash along with a friend.