Caller in Gates case says she'd do it again

Whalen's 911 call brought police to home of Harvard professor Henry Louis Gates Jr.
Whalen says criticism was painful to her, harmful to community
She praises parents' values of respect for others, kindness to strangers

(CNN) -- In her first public appearance, the woman who made the 911 call that led to the arrest of Harvard professor Henry Louis Gates Jr. said Wednesday she would make the call again if placed in the same situation. 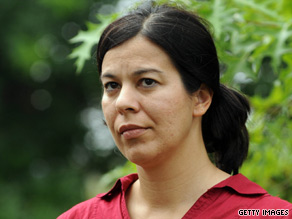 Lucia Whalen, who called 911 to report a possible break-in, speaks to reporters Wednesday.

The arrest and its aftermath have sparked accusations of racial profiling, and even President Obama has become involved. He plans to meet Thursday with Gates and the arresting officer, Sgt. James Crowley, at the White House.

Gates was arrested for disorderly conduct July 16 in Cambridge, Massachusetts, after he had shown Crowley that the home he was suspected of breaking into was his. The charge was later dropped.

"If you're a concerned citizen, you should do the right thing if you're seeing something that seems suspicious. I would do the same thing," Lucia Whalen said.

Whalen said she contacted police after an older woman with no cell phone told her she was worried that someone was trying to break into the house.

She said she was en route to lunch when the woman approached her.

"I thought: 'I'm the one with the cell phone. I should probably call'" police, she explained.

Although Whalen never referred to black suspects when she called authorities about the suspected break-in, the incident prompted a heated discussion across the nation on race relations in the United States.

On Wednesday, Whalen -- her voice shaky and sometimes breaking -- called the criticism of her actions "painful" and "difficult."

"People called me racist and said I caused all the turmoil that followed, and some even said threatening things that made me fear for my safety," she told reporters.

"I knew the truth but I didn't speak up right away, because I did not want to add to the controversy."

Whalen said the criticism of her had a ripple effect.

"Cambridge is a wonderful place, and when I was called racist and I was a target of scorn and of ridicule because of the things I never said, the criticism hurt me as a person, but it also hurt the community of Cambridge," she said, close to tears.

"Now that the tapes are out, I hope people can see that I tried to be careful and honest with my words.

"It never occurred to me that the way I reported what I saw would be analyzed by an entire nation. But so many people have responded with words of support. I hope now that the truth of the tapes will help heal the Cambridge community as much as it has helped to restore my reputation and integrity."

Asked whether she spoke to Crowley when he arrived at Gates' home, she said: "The only words I exchanged were 'I was the 911 caller,' and he said, 'Stay right there.' "

Whalen said she respects Gates and the police, despite her ordeal, and hoped that speaking out would not add to the controversy.

"I am proud to have been raised by two loving parents who instilled in me values, including love one another, be kind to strangers and do not judge people based on race, ethnicity or any other feature other than their character," said Whalen, who was born in the United States to Portuguese parents.