(CNN) -- A fight over books depicting sex and homosexuality has riled up a small Wisconsin city, cost some library board members their positions and prompted a call for a public book burning. 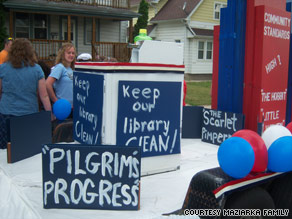 A washing machine was part of a July 4 parade float made by a group seeking changes at West Bend's library.

The battle has stirred much of West Bend, a city of roughly 30,000 people about 35 miles north of Milwaukee. Residents have sparred for months on blogs, airwaves and at meetings, including one where a man told the city's library director he should be tarred and feathered.

The row even spread to this year's Fourth of July parade, which included a float featuring a washing machine and a sign that read "keep our library clean."

"If you told me we would be going through a book challenge of this nature, I'd think, 'Never in a million years,' " said Michael Tyree, director of the West Bend Community Memorial Library.

Ginny Maziarka, 49, said the books in the section of the library aimed at children aged 12 to 18 included homosexual and heterosexual content she thought was inappropriate for youths.

She and her husband also asked the library to obtain books about homosexuality that affirmed heterosexuality, such as titles written by "ex-gays," Maziarka said.

"All the books in the young-adult zone that deal with homosexuality are gay-affirming. That's not balance," she said.

The library did not agree with the Maziarkas' suggestions, and the couple appealed to the library board. Ginny Maziarka, a mother of four, began blogging about the issue and the local newspaper picked up the dispute, sparking the opposition.

Maria Hanrahan, also a West Bend mom, set up a rival blog to argue the other side.

"I'm against any other party telling me what's appropriate for my child and what isn't," said Hanrahan, 40, who also created a West Bend Parents for Free Speech group. "We don't mean to say these are appropriate for everyone, but we don't feel they should be set apart from other materials or restricted from the young-adult section."

By this time, many more people had become caught up in the issue, which was generating heat. When Hanrahan appeared on a local radio, callers attacked her views, she said.

"People were being very passionate on both sides of the issue. I think it divided the community a little bit," she said.

With the debate raging, the city council voted in April against renewing the terms of four library board members, in part because council members thought the board was dragging its feet, library director Tyree said.

The Maziarkas were still fighting to have books moved, having identified 82 questionable titles -- more than double their original list. Then they stopped targeting a list of books and circulated a petition that asked the board to label and move to the adult section any "youth-targeted pornographic books" -- including books that describe sex acts in a way unsuitable for minors. The books could still be checked out freely by anyone.

One book she objects to is "The Perks of Being a Wallflower," in which a fictional teenage boy tells about his freshman year in high school, including rape and homosexual and heterosexual sex between teens.

Tyree said book excerpts found on Maziarka's blog had been taken out of context and, in the case of "Wallflower," the criticism missed some of the book's points.

"In this book, there were consequences of ... rape, of indiscriminate sex. Those were not portrayed so glowingly," he said.

By the time the library board met on June 2, each side had collected more than 1,000 signatures backing their position. Dozens of residents spoke at the meeting before the board -- still including the outgoing members -- unanimously voted to keep all policies the same.

The demand to move the books was always going to be problematic because no authority has determined that any of the titles are pornographic or obscene, Tyree said.

Book challenges aren't new. More than 500 were reported in the United States in 2008, mostly in schools and public libraries, Deborah Caldwell-Stone of the American Library Association said.

But this one was attracting extra attention. Caldwell-Stone, who monitored the dispute, said moving any young-adult book to the adult section would have been a form of censorship, even if teens were free to check them out.

"The whole intent was shelving books not on the basis of age or reading ability, but because they disapprove of the content with the intent of restricting access. That's a burden on First Amendment rights," Caldwell-Stone said.

Outside West Bend, the fight caught the attention of Robert Braun, who, with three other Milwaukee-area men, filed a claim against West Bend calling for one of the library's books to be publicly burned, along with financial damages.

The four plaintiffs -- who describe themselves as "elderly" in their complaint --- claim their "mental and emotional well-being was damaged by [the] book at the library."

The claim, unconnected to the Maziarkas, says the book "Baby Be-bop" -- a fictional piece about a homosexual teenager -- is "explicitly vulgar, racial and anti-Christian."

Braun, who says he is president of a Milwaukee group called the Christian Civil Liberties Union, said he singled out the book because it "goes way over the line" with offensive language and descriptions of sex acts.

The call for burning the book showed his passion, Braun, 74, said. "I don't sit on the fence when I do these things. When I make a decision to speak up on something, I go for it."

The ALA will help the library oppose the claim if it goes forward, Caldwell-Stone said, adding she felt that was unlikely because "it has very little basis in law."

Back in West Bend, the Maziarkas and their supporters are gearing up for another go at the library, in part because the board now has its four new members. They do not want books burned, but they do want action.

"We want parents to decide whether they want their children to have access to these books ... and we want the library's help in identifying [them through labeling and moving]," Maziarka said. "It's just common sense."