(CNN) -- Walter Cronkite, the CBS anchorman known as "Uncle Walter" for his easygoing, measured delivery and "the most trusted man in America" for his rectitude and gravitas, died Friday night in his New York home, CBS reported. 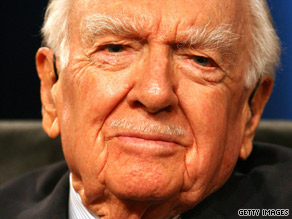 "Walter was always more than just an anchor. He was someone we could trust to guide us through the most important issues of the day; a voice of certainty in an uncertain world," President Obama said in a statement Friday.

"He was family. He invited us to believe in him, and he never let us down. This country has lost an icon and a dear friend, and he will be truly missed."

His career spanned much of the 20th century, as well as the first decade of the 21st.

The native of St. Joseph, Missouri, broke in as a newspaper journalist while in college, switched over to radio announcing in 1935, joined the United Press wire service by the end of the decade and jumped to CBS and its nascent television news division in 1950. iReport.com: Share your memories of Cronkite

He also made his mark as an Internet contributor in his later years with a handful of columns for the Huffington Post.

"He was the consummate television newsman," Don Hewitt, the onetime executive producer of the "CBS Evening News," told CNN. "He had all the credentials to be a writer, an editor, a broadcaster. There was only one Walter Cronkite, and there may never be another one."

At times he even made news: A 1977 question to then-Egyptian President Anwar Sadat about Sadat's intent to go to Israel -- at the time considered a nonstarter because of the lack of a treaty between the two countries -- received a surprising "yes" from the Egyptian leader.

Soon after, Sadat traveled to Jerusalem, a trip that eventually led to the Camp David Accords, which included a peace deal between Israel and Egypt.

At his height of influence as CBS anchorman, Cronkite's judgment was believed so important it could affect even presidents. In early 1968, after the Tet Offensive, Cronkite traveled to Vietnam and gave a critical editorial calling the Vietnam War "mired in stalemate."

Watch an overview of Cronkite's life »

Cronkite's own name was often floated as a presidential possibility -- wishful thinking on the part of some pundits, because Cronkite had little desire to enter politics once he'd become a successful anchorman.

And he disliked the corporatization of news.

"The nation whose population depends on the explosively compressed headline service of television news can expect to be exploited by the demagogues and dictators who prey upon the semi-informed," he wrote in his 1996 memoir, "A Reporter's Life."

In a 2005 interview with CNN's Wolf Blitzer, he observed, "The misfortune with broadcasting today is that all -- even including your network, which is dedicated to the news -- do not take enough time to give us all of the facts and the background."

"Walter was truly the father of television news. The trust that viewers placed in him was based on the recognition of his fairness, honesty and strict objectivity," said "60 Minutes" correspondent Morley Safer in a statement.

"And of course, his long experience as a shoe-leather reporter covering everything from local politics to World War II and its aftermath in the Soviet Union."

Mike Wallace, "60 Minutes" correspondent emeritus, said simply: "We were proud to work with him -- for him -- we loved him."

Walter Leland Cronkite Jr. was born in St. Joseph, Missouri, on November 4, 1916. His father was a dentist, and Cronkite, who admired the man greatly, grew his famous mustache in emulation of his father.

The family moved to Kansas City soon after, and when he was 10, moved again to Houston, Texas. He remembered being attached to news at an early age, from delivering newspapers to starting a high school publication. Cronkite attended the University of Texas in Austin, but dropped out of college in 1935 after gaining a full-time job as a newspaper reporter.

He moved to Kansas City for a radio job at KCMO, where he was famed for his broadcasts of football game recreations. He would use wire reports about football games to broadcast what sounded like live, play-by-play commentary on the match.

It was in Kansas City that he also met his future wife, Betsy Maxwell, in the summer of 1936. The two married in 1940 and enjoyed almost 65 years of marriage. Betsy Cronkite died in 2005.

"She was one of the most beautiful people I ever saw in my life," he said in a PBS special. "I saw her for the first time ... coming down the hall ... and I fell in love before I ever knew her name, or what she did, or if I whether I would ever see her again in life."

Cronkite had a short stint with the United Press in 1937 -- "the KCMO experience," he wrote in "A Reporter's Life," "had cooled any thought I had that radio might be an interesting medium in which to practice journalism" -- but nevertheless, he joined an Oklahoma City station within a year to broadcast University of Oklahoma football games. After a detour with Braniff Airlines, he went back to the UP and the newspaper reporting he loved.

In 1942, after the United States' entry into World War II, he became a war correspondent, part of an elite corps of correspondents dubbed "the Writing 69th." As part of that unit, he accompanied a bomber on D-Day (the mission was thwarted by cloud cover) and flew on a number of dangerous sorties. After the war, he became the chief UP correspondent at the Nuremberg Trials for war crimes. He was widely admired; CBS tried to lure him into its Edward R. Murrow-led fold during the war, but Cronkite preferred being a newspaperman.

Cronkite opened UP's Moscow, Russia, bureau after the war, but when the wire service tightened up on his salary in 1948, he decided to go back to radio at the urging of a friend who owned a radio station. He was the Washington correspondent for a radio group. Two years later, CBS came calling again, and this time Cronkite took the network up on its offer.

But now the medium was television. Cronkite became the anchor of WTOP-TV, armed with little more than wire reports and his own skills, he recalled in his memoir.

Two years later, he broke into the national consciousness with his work at the 1952 political conventions, serving as CBS' "anchorman" -- a word coined to describe Cronkite's role as point person for the network's correspondents. Though there's some dispute as to who coined the word, Cronkite's influence was noted: in Sweden at the time, he recalled, anchormen were called "cronkiters."

But CBS News had a deep bench. The division was led by Murrow throughout the 1950s, and a number of other famous names -- Eric Sevareid, Douglas Edwards, Howard K. Smith -- were part of the team. Cronkite distinguished himself as CBS' lead space reporter as the United States and Soviet Union launched the space race. He never lost his taste for the beat, working with CNN on shuttle launches as recently as John Glenn's return mission in 1998.

In 1962, Cronkite took over as anchor of CBS' "Evening News" from Edwards. Television news was still in its infancy; the broadcast Cronkite delivered was 15 minutes long, dependent on sometimes day-old film, and in black and white. But with the Cold War, civil rights movement and the increasing rapidity of communications, the news business was changing. On September 2, 1963 -- Labor Day -- Cronkite's broadcast became a half-hour; the centerpiece was an extended interview with President John F. Kennedy.

A little less than three months later, Kennedy was assassinated. Cronkite's coverage of that event, including a rare display of emotion on camera -- as he broadcast the news of Kennedy's death from the CBS newsroom -- helped cement his status.

However, for the first half of the 1960s, Cronkite's broadcast was No. 2 to NBC's "Huntley-Brinkley Report," hosted by Chet Huntley and David Brinkley. It wasn't until later in the decade that Cronkite and CBS overtook the NBC team for the No. 1 position, a mark it would hold for the rest of Cronkite's 19-year tenure.

"Uncle Walter" increasingly became the most-admired figure in the news media. His sign-off, "And that's the way it is," became a national catch-phrase. His coverage of moon missions was legendary, with his ability to anchor, unperturbed, for hour upon hour, earning him the affectionate nickname "Old Iron Pants."

Read reaction to his death »

Another rare example of Cronkite showing emotion on air was the joy he expressed at Apollo 11's 1969 moon landing: "Man on the moon!" he exulted, rubbing his hands in delight.

'Most trusted man in America'

In 1972, a poll named him "the most trusted man in America." The anchorman had been one of the few TV journalists to note the import of Bob Woodward and Carl Bernstein's reporting on Watergate and helped prompt CBS into following the story aggressively.

The network broadcast two extended segments on the affair just before the 1972 election. Cronkite was helped immensely by CBS' then White House correspondent, Dan Rather, who became one of Nixon's least favorite reporters with his determined questioning at White House press conferences.

Rather's and Cronkite's lives would cross again several years later. By the end of the 1970s, television news had become news itself, with Barbara Walters' million-dollar ABC contract in 1976 making headlines. The race to succeed Cronkite, who was nearing 65 and announced his forthcoming retirement in 1980, became a national focus.

Watch CNN's John Roberts talk about Cronkite's influence on him »

In the end, Rather won the battle to succeed Cronkite over Roger Mudd, who was Cronkite's regular fill-in. Cronkite gave his last "Evening News" broadcast on March 6, 1981. His successor had a number of up-and-down years, which Cronkite watched from a distance. The two anchors were not "especially chummy," Cronkite once said.

In his later years, Cronkite -- who became a CBS board member -- distinguished himself with various news specials, but was disappointed he wasn't allowed to take a greater role at CBS.

"I want to say that probably 24 hours after I told CBS that I was stepping down at my 65th birthday, I was already regretting it. And I regretted it every day since," he once said.

He had planned to do documentaries for the network, as well as continue his summer science series "Walter Cronkite's Universe," but the series was canceled in 1982, and CBS was devoting fewer resources to documentaries. He also stayed physically active, an energetic tennis player and sailor.

Cronkite received dozens of awards during his life, including a number of Emmys and Peabodys. In 1981, he was awarded the nation's highest civilian honor, the Presidential Medal of Freedom, by Jimmy Carter.

He also played himself in movies and on TV, including memorable episodes of "The Mary Tyler Moore Show" and "Murphy Brown."

But he never lost his zest for reporting, nor his opinions about the news media. His daughter, Kathy, played a Patty Hearst-like character in the scabrous 1976 movie "Network," a film Cronkite said "was all comedy" to him, though he shared beliefs in its message. He disparaged what he called "fluff" and constantly exhorted news departments to focus on hard news -- without opinion.

"Our job is only to hold up the mirror -- to tell and show the public what has happened," he once said.

Cronkite is survived by his three children, Nancy, Kathy and Walter III "Chip"; and four grandchildren.