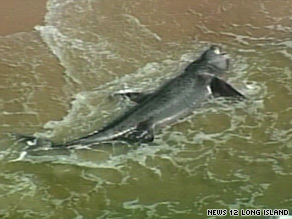 The male basking shark, which weighed an estimated 5,000 pounds and was measured at 26 feet, 6 inches, died shortly after authorities arrived on the scene, according to marine educator Tracy Marcus of the Cornell Cooperative Extension.

Marcus, who was at the beach at the time, said there were no outer abrasions on the shark, ruling out of the possibility of a boat strike, and the cause of the shark's death was unknown to investigators.

Basking sharks can grow up to 35 feet in length and are the second-largest fish in the oceans after the whale shark, Marcus said.

The basking shark, which is non-threatening to humans, feeds mostly on plankton and smaller fish.

This particular species spends the summer months off America's Northeast coast and then migrates to the warm waters off South America for summer in the Southern Hemisphere.

All About Sharks and Rays • Long Island