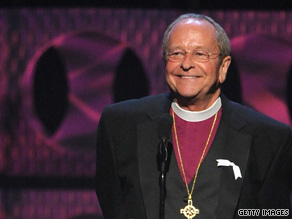 Gene Robinson is the Episcopal Church's first -- and so far only -- openly gay bishop.

A key committee voted overwhelmingly Monday to start putting together blessings to be used in same-sex marriages, the church's official newspaper reported.

Separately, the House of Bishops voted by a wide margin to allow gays and lesbians to become bishops, Episcopal Life reported.

Both measures must be approved by the church's General Convention before taking effect, but expert Mark Silk said there is "little reason" to think the changes will not "sail through."

"They basically decided to move forward on all fronts with regularizing the status of gays and lesbians within the church," said Silk, director of the Leonard E. Greenberg Center for the Study of Religion in Public Life at Trinity College in Connecticut.

A leading campaigner for gay rights within the Episcopal Church welcomed the vote on bishops.

"There is no question that today's vote in the House of Bishops was an historic move forward and a great day for all who support the full inclusion of all the baptized in the Body of Christ," said Susan Russell, president of Integrity USA.

The vote shows the Episcopal Church "striving to actually become the church former Presiding Bishop Edmond Browning called us to be nearly 20 years ago now ... a church where there are no outcasts," she said in a statement on the group's Web site.

The Episcopal Church created controversy in 2003 with its decision to ordain Gene Robinson, who is openly gay, as a bishop. The move raised the possibility of a split within the worldwide Anglican Church, the third-largest Christian denomination, with about 70 million members around the world.

The Episcopal Church, the U.S. branch of the Anglican Church, has not ordained another openly gay bishop since Robinson.

"The decision has been to kind of chill out on a bunch of things," Silk said.

But Monday's vote ends what had been, in effect, a moratorium, he said.

It was the Episcopal Church saying that "this wasn't an anomaly when we elected Gene Robinson. We affirm that partnered gay people do have callings [to be clergy], and we have to recognize them."

"It is bringing the church's position in line with the civil society's," Silk said.

The head of the Church of England, Archbishop of Canterbury Rowan Williams, declined Tuesday through a spokesman to comment on Monday's moves.

But on Monday, he expressed "regret" at the vote on gay and lesbian bishops, according to Episcopal Life.

"I regret the fact that the will to observe a moratorium is not the will of such a significant part of the church in North America," the paper quoted him as saying.

A number of Episcopal dioceses have broken with the official church structure over gay and lesbian issues, forming the breakaway Anglican Church in North America.

They say the mainstream Episcopal Church and the aligned Anglican Church in Canada "have increasingly accommodated and incorporated un-Biblical, un-Anglican practices and teaching."