(CNN) -- Eleven members of Greenpeace pleaded not guilty to federal charges after they were arrested for hanging a banner on South Dakota's Mount Rushmore Wednesday to protest global warming as the G-8 summit in Italy begins. 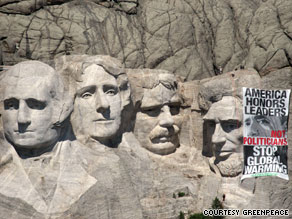 Greenpeace says it does not think its 2,275-square-foot sign will damage Mount Rushmore's structure.

Twelve protesters were arrested, but one was released after questioning. The others appeared before a federal magistrate Wednesday afternoon and received citations for illegal climbing and trespassing, according to federal prosecutors.

Each person faces a maximum of six months in prison and possibly up to a $5,000 fine.

The charged protesters came from eight states, including California and New York. The banner was up for an hour before it was seized. The National Park Service is holding it as evidence, authorities said.

Watch tourists react to the protest »

Some of the demonstrators breached a controlled area and got to the top of the monument, Mount Rushmore spokeswoman Patty Rooney told CNN.

Greenpeace, a nonprofit organization that supports environmental causes, said the sign is part of a global day of action to urge world leaders at the G-8 summit to make global warming a priority and to take the actions necessary to stop climate change.

"We are at a key moment in history when we must challenge our president to take real leadership," said Carroll Muffet, deputy campaign director for Greenpeace.

"The steps taken so far have been frankly inadequate. If President Obama wants to take his place among the great leaders of history, he must take aggressive measures to combat climate change and prioritize a strong deal in Copenhagen," Muffet said in a statement.

"We're here at Mount Rushmore to inspire Americans to take action, and remind the world that heroism and leadership are part of our nation's history -- and must be a part of our future," Muffet said.

The G-8 meeting, which includes leaders from the world's most industrialized nations, is taking place in L'Aquila, Italy.

Rooney said the monument will be assessed for any structural damage. She said a security system alerted park staff to the protest at midday.

Greenpeace acknowledged the protest is illegal and dangerous, but said it does not believe the sign damaged the solid granite structure.