(CNN) -- Rescue teams Thursday discovered the bodies of two people killed in a helicopter crash that happened Tuesday in the mountains near Santa Fe, New Mexico. 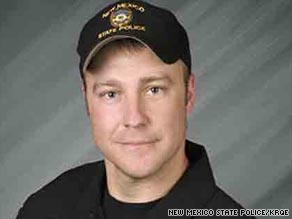 The pilot, Sgt. Andrew Tingwall, was one of two people killed in Tuesday's helicopter crash in New Mexico.

Tuesday night, Tingwall and another officer, Wesley Cox, picked up Yamamoto, who was lost in the mountains, and were returning to Santa Fe when their chopper crashed into a snowy face of Santa Fe Baldy, a 12,000-foot-high peak, Segotta said. Visibility was zero because of heavy cloud cover, he said.

Tingwall was the pilot, the state's Department of Public Safety said.

Cox was able to walk to rescuers Wednesday and was airlifted to a hospital, where he was treated for hypothermia and injuries to his back and right leg. He was in serious condition Thursday at St. Vincent's Hospital in Santa Fe, said Arturo Delgado, a hospital spokesperson.

Cox told police that the helicopter landed hard and tumbled downhill, ejecting all three on board. After finding Cox, authorities were optimistic that Tingwall and Yamamoto might be alive.

Search teams discovered the wreckage Wednesday, a day before the bodies were found.

Yamamoto, of Tokyo, Japan, was a graduate student at the University of New Mexico, KRQE reported.

An online police memorial page said Tingwall had been with the state police since 1995 and had logged 1,300 hours of flying time.

Tingwall received a medal of valor after he single-handedly rescued a man from a river last summer, said Cox. Tingwall was embarrassed about receiving the medal because he felt he was only doing his job, said Cox, who said he knows Tingwall as a "tough, resourceful, friendly guy."

Cox is expected to make a full recovery, Segotta said.