WINNER, South Dakota (CNN) -- Neal Wanless, a down-on-his luck cowboy before winning a $232 million Powerball jackpot last month, was always known for his big heart even when he barely had a dime to his name. 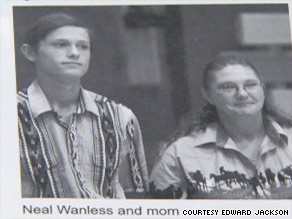 Now, with his good fortune, neighbors and former teachers worry that he might be easily separated from his new-found money, although he doesn't seem to be around to give any of it away.

Flip through the yearbook at Todd County High School and the portrait emerges of the "good kid" that teachers and classmates remember.

Wanless ran cross-country, played in the band and graduated second in his class -- the 2004 Salutatorian.

Diane Linster, his math teacher, remembers Wanless coming early to school and staying late to pump up his grades.

Chris Leneaugh, once an assistant cross-county coach, remembers a dedication to running that propelled Wanless from the middle of the pack to near the front of the team by his senior year.

"Neal never gave up trying," Leneaugh said. "That's what I liked about him, his dedication."

The yearbook also tells the tale of a hat-wearing rancher who was one of a few white students in a school filled with Native Americans -- Lakota Sioux from the Rosebud Indian Reservation.

"Oh man, he was always cowboyed up," said former classmate Mike Prue. "We are all Natives around here and there he was with his Wrangler shirt and jeans. He really stuck out."

Prue and his buddy Steve Plank said Wanless would help them with their homework, despite the differences.

Wanless and his parents had recently moved into a camper on their ranch, after losing their home to foreclosure, according to neighbor Erv Figert.

A sign with chipped off green lettering sits in the grass at the entrance to the Wanless property.

"There was a sign out there that said 'the ranch that God built,' " said Joe Prue, father of Mike Prue. "And for a while there you thought, where was God when everything was coming apart. And now, maybe God helped them."

Neighbors say they have not seen anyone come or go from the Wanless Ranch after Neal briefly emerged at a press conference last week to accept a giant-sized check from the May 27 drawing. For now, the gate to the Wanless ranch is held tight by a new lock, linking a rusted-brown chain.

Rumors travel through the green fields of South Dakota faster than the Internet. Talk is cheap with millions of dollars to loosen the tongues. Many believe the Wanless family is going to buy a place up north, maybe by Pierre, but the cowboy with the big heart isn't talking.

"That grin you saw on his face on television (when Wanless accepted the check) is always there," said Linster. "He always looked like he was probably up to something."

Now he has the money to do something about it.

All About South Dakota