(CNN) -- It is a boarding pass unlike any other. It's a memory of a day that nearly was his last on earth. 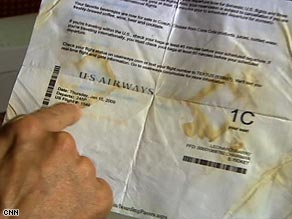 US Airways passenger Barry Leonard now has the other half of his boarding pass from the fateful flight.

When a FedEx package arrived at Barry Leonard's home recently, he had no idea it contained items from his flight that ended up in the Hudson River.

Leonard was seated at the front of US Airways Flight 1549, and when pilot Chesley "Sully" Sullenberger amazingly landed the plane in the river, Leonard left everything he had behind and dove into the frigid water.

He thought all he had left from that January day were the clothes he had on, including a pair of jeans he still wears.

But recently the package with most of his left-behind belongings showed up at his Charlotte, North Carolina, home.

"Everything from the Wall Street Journal of that day to my W-2 form that I didn't even realize was in this package," he says. "You know my briefcase that I'd had for decades, it was all of those things."

Watch as Leonard brings out the items recovered from the water »

As he showed CNN the contents he discovered another item -- a memorable slip of paper.

"This is actually the other part of my boarding pass from January 15. As you can see here January 15, flight 1549 and my seat number 1C," he says.

To help return personal items to its passengers, US Airways hired Global-BMS, a Texas-based company that recovers and restores items from large disasters.

Global-BMS sorted through nearly 30,000 items from the flight, cleaning them in a slow, tedious process that often involved freeze-drying items to preserve them while they waited to be processed.

"Passengers' emotional ties to their possessions because of a traumatic incident like this, it's highly emotional. So we just want to make it available," Mark Rocco, a senior vice president of Global-BMS, tells CNN.

Some of the items that were returned to the 150 travelers were unusable after being submerged, especially electronic items like headphones and music players.

But for a lot of folks, personal effects show a little damage but are still good.

Vicki Barnhardt tried on her running shoes, and though they were a little tight at first, she wears them now when she goes jogging in Huntersville, North Carolina.

She tells CNN that she evacuated the plane only with her cellphone, leaving behind her purse, her wallet, driver's license, some flash drives and other items.

She got most of her possessions from the plane back -- a coat, a pair of gloves and her cash are still missing -- and the items in the boxes seem in pretty good shape.

The flash drives still work, though you can see some "corrosion" on them. She also got back a three-ring binder, and all her notes are still readable.

Maryann Bruce found her diamonds in the parcel that was returned to her in Cornelius, North Carolina. It brought back memories of the landing in the river and made her thankful to be alive.

"I just focused on wow, you know, I got all this stuff back," she says.

All About US Airways Group Inc. • Air Travel