At 3 p.m., Americans take a minute to reflect

(CNN) -- Americans were asked to stop whatever they were doing at 3 p.m. local time Monday to share a minute on Memorial Day and honor those who have died in the cause of freedom. 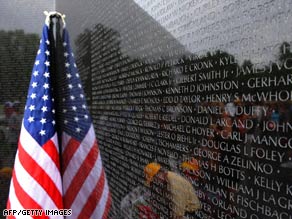 Americans were asked to take one minute at 3 p.m. Monday to pause and reflect on those who died in battle.

"The time 3 p.m. was chosen because it is the time when most Americans are enjoying their freedoms on the national holiday," according to the White House Commission on Remembrance. Congress established the National Moment of Remembrance.

"The Moment does not replace traditional Memorial Day events; rather it is an act of national unity in which all Americans, alone or with family and friends, honor those who died for our freedom," the Commission on Remembrance said on its Web site.

"It will help to reclaim Memorial Day as the sacred and noble holiday it was meant to be. In this shared remembrance, we connect as Americans."

Observances included an interruption of Major League Baseball games, the pausing of the National Memorial Day Parade in Washington and the National Grocers Association and Food Marketing Institute asking shoppers to pause in stores nationwide to remember the fallen.

"We want our citizens to contemplate the ties that bind us and take a moment to put 'Memorial' back into Memorial Day," said Carmella LaSpada, executive director of the Commission on Remembrance.

Children touring Washington inspired the idea when LaSpada asked them what Memorial Day meant and they said that's when the swimming pool opens, according to the commission's Web site.

All About U.S. Armed Forces