Kids who lost parents to war bond at camp

WASHINGTON (CNN) -- In Paul Syverson's photo album, there is only one family picture, taken right after his little sister was born. Paul, then 7, and his father beam with an identical grin. 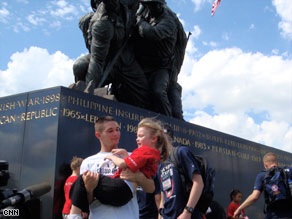 Amy Syverson visits the Iwo Jima memorial with mentor Kohn Fisher as part of a camp for kids of fallen soldiers.

Five years after his loss, the pain still reverberates with sickening suddenness. To help cope, Paul headed out to spend the Memorial Day weekend with a young military volunteer mentor instead of his dad.

"I try not to think about the bad stuff," Paul said. "I just try to remember him as an awesome guy and what a great dad he was."

Paul, 12, and his sister, Amy, now a cheeky and rambunctious 5-year-old in pigtails, joined 350 other grieving children at a camp for military families in Washington this Memorial Day. For many, the Tragedy Assistance Program for Survivors, or TAPS, camp is a yearly tradition, a time for kids to play together and pay homage to their loved ones' sacrifices.

TAPS is a nonprofit funded by private donations that has helped military families for 15 years. Families pay for their hotel rooms and a small registration fee for the camp. Donations usually cover the airfare.

Military families often learn about the survivor camps in the casualty packet they receive when they are notified of a parent's death.

Each child at the camp gets assigned a military mentor who is at his or her side throughout the weekend. The mentors -- many of whom are in their early 20s -- seem to form instant and deep connections with their charges. Some play touch football in the workshop rooms, the young children wildly tackling their muscular military escorts. Others color together or play board games. And sometimes they talk about pain and loss.

"They even ask me questions. They go, 'I don't know what a landmine is. What is a landmine?' " said Matt Thibodeau, an active-duty soldier who was assigned to mentor Paul for the weekend. "There were a couple children who didn't understand how their parents had passed away, and we try to just help to be there to support them if they need it, kind of a shoulder to cry on."

Thibodeau said volunteering for TAPS seemed almost like a duty, an extension of the brotherhood of the military.

"I thought, if I were to have children and I were to go and pass away, that I would want somebody to do the same for me," he said. "A lot of people don't realize what their parents have done for the country, and we're to try to support that and give them a little of what they're missing."

During the weekend, the children take in the sights of the nation's capital. The mentors accompany them to the Fort Myer military base in Virginia to visit the horses that pull the caisson wagons during military funerals.

At the Iwo Jima and Washington monuments, the groups pause to contemplate the sacrifices that generations of service members have made for the country. The groups also planned to attend President Obama's speech and wreath-laying ceremony at Arlington National Cemetery on Memorial Day.

"This is their chance to reconnect with the military culture, learn coping strategies, learn how, on Memorial Day, America honors those who have served and died, and that their family is part of this national legacy," said Bonnie Carroll, founder of the TAPS program.

For some campers, the circumstances of their loss make their feelings more complicated.

Joey Ruocco, 15, lost his father in 2005. Marine Maj. John Ruocco committed suicide before he was to ship out for his second tour in Iraq.

"Dealing with something like your dad dying is one thing, and then having to think about all this stuff about suicide, about why, and is there something I could have done? Could have said?" said Joey, who was 10 when his father died. "But you can't think about that stuff. You have to think about the happy stuff, what he did with you."

The first time Joey came to camp, he said he worried he might be dogged by the stigma of his dad's suicide. But Joey said he was accepted without comment, and he's learned to be proud of his father's service and sacrifice -- and of his life -- all the same.

"Everything that you take for granted, all sorts of silly things, like being able to ride your bike down to the corner store to get a slushie or something, wouldn't be possible if it weren't for men like our friends out there, our dads," Joey said. "They're keeping our country free and being able to do stuff like that."

All About U.S. Armed Forces • Iraq