(CNN) -- The four-year-old daughter of boxing legend Mike Tyson was in "extremely critical condition" after she was injured in a treadmill accident at her home in Phoenix, Arizona, police said. 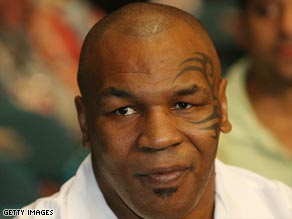 Former world boxing champion Mike Tyson traveled from Las Vegas to Phoenix to be at his daughter's bedside.

Exodus Tyson was found by her 7-year-old brother on a treadmill "with her neck on ... a cable" attached to the machine, police said in a statement.

The mother "took her daughter off the cable" and called authorities, according to police.

Former world heavyweight champion Tyson traveled from Las Vegas, Nevada, to Phoenix where his daughter was on life support in critical condition on Monday, police said.

"The Tyson family would like to extend our deepest and most heartfelt thanks for all your prayers and support, and we ask that we be allowed our privacy at this difficult time," it read.

Tyson also won the WBA and IBF versions of the crown during a career that was littered with controversy including disqualification for biting Evander Holyfield's ear during a 1997 title rematch.

He retired from the sport in 2005, but was back in the news this month with the U.S. release of the film "Tyson," a documentary that premiered at the Cannes Film Festival last year.

All About Mike Tyson