Crew of crashed plane being used as 'scapegoats,' relative says

WASHINGTON (CNN) -- The mother of the co-pilot who died in a plane crash near Buffalo, New York, in February, said Thursday that her daughter and the pilot were "being used as a scapegoat." 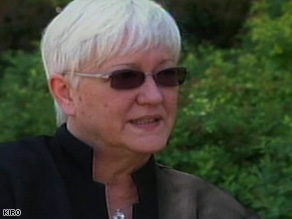 Lynn Morris says she was shocked at how her daughter, the plane's co-pilot, was portrayed in the NTSB hearings.

Lynn Morris' daughter, First Officer Rebecca Shaw, was among the 50 people killed in the crash of the plane, operated by Colgan Air. Morris made the comments on the final day of investigative hearings held by the National Transportation Safety Board.

"I think I walked out of the hearings in shock, because I truly felt that both she and the captain were being used as a scapegoat," Morris said.

Testimony from the hearings, which began Tuesday, revealed that fatigue may have contributed to the failure of Shaw and Colgan Air Capt. Marvin Renslow to save the plane as it approached Buffalo Niagara International Airport.

Testimony on Wednesday indicated that crews on a number of airlines could be suffering from lack of sleep. Many crews live far from their base of operations, causing them to come to work already tired from travel, NTSB investigators said.

Renslow had nearly a full day off before assuming command of Continental Connection Flight 3407. Yet the NTSB investigation found he slept in the Newark Airport crew lounge -- against Colgan Air regulations. The airline, though, appears not to have been enforcing that rule.

"Nobody argues that the human body needs to have its rest, and sometimes it doesn't gel with the schedules of an airline," testified Capt. Rory Kay, executive air safety chairman for the Air Line Pilots Association.

Daniel Morgan, Colgan's vice president for flight safety, said, "People can come in between their flights to take a nap." Asked if napping was considered sleeping, he replied, "That's a definition I'm probably not prepared to answer."

A nap of about 10 to 20 minutes can be restorative for most people, Dr. Michael Silber, a co-director of the Center for Sleep Medicine at the Mayo Clinic in Minnesota, told the clinic's monthly "Women's HealthSource" publication last year. However, a longer nap can make people feel groggy, Silber said for the publication's October issue.

Shaw had three days off before the flight. She commuted through the night from Seattle, Washington, catching rides on connecting Fed Ex flights to get to Newark, New Jersey, where the Colgan flight originated.

"It is shocking. It's hard to believe that it is allowed to go on," said Kathy Johnson, whose husband, Kevin, died in the crash. She said Wednesday she was furious that the crew may have been functioning on little sleep.

The NTSB, which has not issued its report on the February 12 crash, said it scheduled the hearings to gather information. The plane plunged into a house in Clarence Center, New York, killing everyone on board and a man on the ground.

The NTSB's preliminary investigation determined there was some ice accumulation on the Bombardier Dash 8-Q400 aircraft, but the "icing had a minimal impact on the stall speed of the airplane."

On Thursday, safety board member Deborah Hersman questioned why Renslow and Shaw apparently didn't notice, as they approached the Buffalo airport, that the plane's speed had abruptly dropped from 207 mph to 150 mph (from 180 to 130 knots).

She asked R. Key Dismukes, chief scientist for the NASA division that focuses on human-centered design and operations, whether this was a period in every flight that is a time of high workload for the crew, meaning their attention may have been diverted.

Dismukes noted that there was a lot going on, including conversations between Renslow and Shaw and communication with a control tower.

"That certainly didn't help the workload situation," Dismukes said. "There were a number of concurrent tasks, and this is a vulnerable period. No questions about it."

Hersman said she had seen the same failure to note a drastic, quick change in speed in other crashes. She suggested that the crew receive an alert in those cases.

"I think an alert that your air speed is deteriorating is kind of like a fire alarm," Hersman said.

On Wednesday, it was revealed that Renslow, in his Colgan Air job application, failed to reveal two pilot exam failures.

The crew also violated a rule that requires cockpit conversation to be focused on the flight.

At Tuesday's hearing, Colgan Air acknowledged that Renslow had never trained on the "stick pusher" emergency system in a flight simulator. The system warns pilots when the plane's speed is too slow.

But in a written statement, the carrier said both Renslow and Shaw had received other specific training on how to handle situations like those that preceded the crash.

All About Accidents and Disasters • U.S. National Transportation Safety Board • Colgan Air Inc.