Americans not losing their religion, but changing it often

(CNN) -- Ingrid Case was a devoted church-goer as a child, not only attending Sunday school, but also serving as an acolyte at her Episcopalian church in Greeley, Colorado. 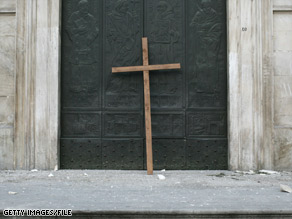 More than half of American adults have changed religion in their lives, according to a new survey.

"Basically, it's the priest's assistant," she explained. "You carry a cross in front of them, get the things they need to perform the service, scurrying around doing what they need."

But after college, Case drifted away. She didn't feel like she fit in socially at the Episcopalian church in Princeton, New Jersey, and found herself uncomfortable with some of its theology.

"I began to see there were some things I wasn't able to get on board with fully. I don't like the traditional Episcopalian focus on the afterlife," she said.

She got involved with the Society of Friends, as the denomination is formally known, through the man who later became her husband, Nat Case. He wasn't raised a Quaker either, she said, though he went to a Quaker-run boarding school as a child.

Her shift in religion was gradual, said Case, 41, a freelance writer and editor in Minneapolis, Minnesota.

Case isn't alone. More than half of American adults have changed religion in their lives, a huge new survey by the Pew Forum on Religion and Public Life found. And there is no discernible pattern to the change, just "a free for all," one of the lead researchers told CNN.

See how many people have changed religions »

"You're seeing the free market at work," said Gregory Smith, a research fellow at the Pew Forum. "If people are dissatisfied, they will leave. And if they see something they like better, they will join it."

And many people list more than one reason for changing, Smith said.

"The reasons people change religions are as diverse as the religious landscape itself," he told CNN by phone.

Some factors that might be expected to drive people away from religion -- such as sex abuse scandals in the Catholic Church, or a belief that science "disproves" religion -- actually play a very small role, the study suggests.

"I've been struck by the very large number across all the different groups who say they just gradually drifted away. Not all of this is the product of carefully considered, conscious decision-making that happens at a specific point in time," Smith said.

Case left the Episcopal Church at a time of huge turmoil within the denomination over whether women could be priests, she remembered, but that wasn't a factor in her decision.

"There was a gradual sense of, 'Hey, that pair of shoes fits better,' " she said.

The number of people who have changed religion is much higher than previously thought, the new report suggests. A Pew Forum study released last year concluded that just over one in four Americans had switched.

Even that lower number was considered "striking," the Pew Forum said, and the latest research suggests it was a serious underestimate.

More than four in 10 American adults are no longer members of the religion they were brought up in, while about one in 10 changed religion, then went back to the one they left, the study found. Just under five in 10 -- 47 percent -- have never changed faith.

Some have switched more than once, and a small number have changed three times or more, according to the study.

The survey supported a study released last month in that it found about 16 percent of Americans are not affiliated with any religion. The American Religious Identification Survey, from Trinity College in Connecticut, found the number to be about 15 percent.

But Smith warned against labeling those people "secular."

And many people who had no religion as children later join one, he said.

"More than half the people who are raised unaffiliated are now affiliated," he said. "More than half [of those people] say they joined their current faith in part because they felt called by God to do so."

"Just because a people is part of a particular group at this point in time, or a part of no religion, doesn't mean they are going to stay that way forever," said Smith.

Mark Silk, a professor of religion in public life at Trinity College, cautioned against assuming the Pew study was uncovering a new trend.

Smith admitted the Pew Forum study could not show much about the past.

"There have been studies that have been done before, but it's hard to make an apples-to-apples comparison," he said.

That said, the fact that most people who switch religions do so before they are 24, combined with the finding that older people as well as younger people have changed, suggests to Smith that the trend has been going on for some time, he said.

"Faith in Flux: Changes in Religious Affiliation in the U.S.," is based on 2,867 new telephone interviews with people who participated in the Pew Forum's "U.S. Religious Landscape Survey," which was released last year.