(CNN) -- The mysterious deaths of 21 prized polo horses Sunday at a club in Florida provides a peek inside the private world of a sport that generally is off limits to all but the very wealthy. 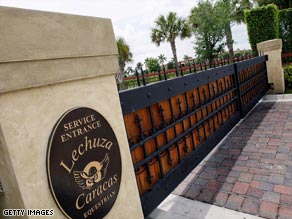 The Lechuza Caracas polo team may not recover from the loss of 21 ponies for years, a polo executive says.

The University of Florida College of Veterinary Medicine in Gainesville and the state-run Kissimmee Diagnostic Laboratories near Orlando are conducting necropsies on the animals.

Initial tests failed to reveal a cause, said Liz Compton, a representative of the Florida Department of Agriculture and Consumer Services. Tissues, organ samples and blood are now being screened for toxic agents, she said.

Scientists have ruled out any contagious disease because the animals died so quickly, said state Agriculture Department spokesman Mark Fagan.

Authorities initially requested necropsies for only the eight horses that were insured, according to Sarah Carey, a representative of the veterinary school, which got the bodies of 15 horses.

Later, the order was expanded to all 15 horses, she said.

The U.S. Polo Association is among the parties cooperating in the investigation.

"In the meantime, we all mourn the loss of these horses," U.S. Polo Association Executive Director Peter Rizzo said in a news release. "There are no words to describe the grief and sadness shared by everyone -- particularly the devastated owners of those magnificent horses."

Watch what investigators are studying »

"I've heard a couple of polo players who were affected with this loss the other day, a couple of them I don't think have left their house since Sunday night," Wash said. "There were a lot of tears there -- these big, tough guys just on their hands and knees, crying over what happened."

The U.S. Open Polo Championship that was interrupted by the tragedy will resume Wednesday with semifinal matches, Wash said. Lechuza Caracas, the team whose horses died, was offered spare mounts from other competitors so they could remain in the competition, but the devastated team chose to withdraw, Wash said.

The Wellington tournament is one of the sport's three major championships, on a par with the U.S. Open in tennis or golf.

Authorities say they believe that the competition facility is safe for the other horses and that whatever killed the 21 horses entered their bodies away from the site.

Fifteen of the animals fell ill shortly before they were to compete Sunday; some died immediately and others lingered for almost an hour. Six others died overnight Sunday to Monday as they were kept in the same trailer in Wellington.

Animals are not kept overnight at the competition site, so no special precautions are in place regarding food, water or bedding, Wash said.

Organizers are planning a short memorial and laying of wreaths in honor of the horses, he said.

Grief counselors are on hand at the facility to help employees deal with the trauma, Wash said.

"The scene can be described as almost like an airplane crash that involved not human life, but horses," he said. "It was horrific."

Polo ponies in the United States are not drug-tested, but the U.S. Polo Association has been considering taking up the practice for several years, Wash said.

"People are calling for reform, and maybe that needs to happen, but until toxicology reports come back, and autopsy reports, we don't even know if [Sunday's incident is] anything related to that."

The Humane Society of the United States has no record of abuse of polo ponies, but that may be a function of the sport's exclusive nature, society spokeswoman Holly Hazard said.

"We are learning about this, as is everyone else," she said. "It may be that perhaps because it's not televised or not as popular as other sports, it's not something that either our constituents or our program is particularly focused on.

"But if there are either performance-enhancing drugs or some problem that is associated with this, we will investigate and we will offer a reward to bring whoever is responsible to justice."

Keith Dane, director of the Humane Society's equine protection program, was en route to Florida on Tuesday to interview people involved in the incident and keep an eye on the investigation, Hazard said.

No evidence has been brought forth suggesting someone deliberately poisoned the animals.

"I guess everything's possible," Wash said. "I've heard all different rumors. I don't know if I even want to go there and think about that."

Compton, the Florida Department of Agriculture and Consumer Services representative, said authorities have seen no evidence of criminal activity in the case.

"Clearly, law enforcement has gotten involved, given the complexity and the scope of the deaths, and they are fact-finding and gathering information, and once we have a specific cause of death, then they can determine where their investigation will go," she said.

The devastated team, Lechuza Caracas, is one of the top teams in the world. The loss could set it back for years, Wash said.

"It's just like baseball or basketball or football," he said. "You're taking years of grooming, training, nurturing to create, really, a first string of horses. And for four polo players, it takes anywhere from six to eight horses per polo player to play a game of polo. So if you're taking 21 horses, they're probably 21 of your first-string horses ... and you've just lost every one of your best players.

"It's not like you could just go out and buy 21 new horses and start at that point."

Polo ponies are thoroughbreds, many of them former racehorses retrained for the game, but they cover a wide range of ages, Wash said. When they get too old to play, they are retired to pasture or stud, he said.

CNN's Kim Segal and John Couwels contributed to this report.