ATLANTA, Georgia (CNN) -- The high-end specialty coffee industry isn't immune to the effects of a recession, but many companies are still doing well. 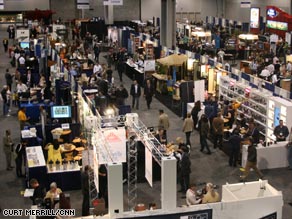 Growers, roasters and equipment manufacturers were represented at the coffee expo in Atlanta.

Portland Roasting had a slow holiday season, but business is picking up, said owner Mark Stell. "February was a great month for us," he said.

Stell traveled from Oregon to Atlanta, Georgia, for the Specialty Coffee Association of America expo, where the show floor was filled with nearly 800 booths featuring everything from exotic coffee beans to the latest Italian espresso machines.

Stell's company sells about a million pounds of coffee a year. He said sales to offices and hotels are down but are being replaced by orders from grocers and universities.

"People don't leave coffee," he said. "They just get it differently."

Riffel said business at his coffee shop was flat last summer, but sales are up 10 percent for the first quarter of 2009.

Business is good enough that Riffel plans to open a second location this year. "Now is a really good time to do that," he said. "Developers and landlords are more flexible and negotiable," even though banks are "pickier than normal."

Joseph Taguman also knows about picky banks. The general manager of the Zambia Growers Association said the lack of financing is holding back the association's 80 farmers.

Taguman said the farmers could grow more than their current rate of about 300 metric tons per year, but trees take time to grow and long-term financing is hard to come by in Zambia.

A couple of aisles over from Taguman's booth, Shawn Contreras sees a similar problem. Contreras is the sales director for Diedrich Manufacturing, which has been selling roasting equipment for nearly 30 years.

He said wholesale roasters are continuing to grow, but smaller operations are having "an extraordinarily difficult time" getting funding.

Consultant Andrew Hetzel acknowledges that credit is a hindering factor for companies, but he is optimistic about the specialty coffee industry.

"The U.S. market is continuing at a steady pace," he said. But it's a slower pace than the past few years.

"Coffee is something that has been with humanity for 1,500 years," Hetzel said. "It's not going anywhere any time soon."