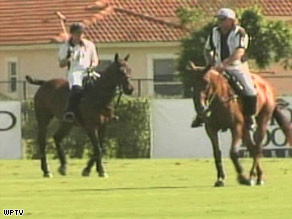 Teams are trying to figure out what happened at the International Polo Club Palm Beach in Florida.

State and local veterinary teams are trying to figure out what happened at the International Polo Club Palm Beach in Wellington, Florida, as team Lechuza Caracas prepared to compete in a U.S. Open match.

Two horses initially collapsed, and as vets and team officials scrambled to revive them, five others became dizzy, said Tim O'Connor, spokesman for the polo club.

"A total of seven died on our property," O'Connor told CNN. Seven other horses died en route to a Wellington horse farm and a veterinary hospital.

The cause of the deaths has not been determined, and necropsies and blood tests were underway, he said.

O'Connor said each team brings between 40 to 60 horses for matches, and they are continuously switched out throughout a match to keep the horses from overexerting themselves.

A meeting will be held to determine whether Lechuza Caracas will compete at a later date, he said.

"Everybody is kind of in shock and trying to figure out what happened," he said. "Nobody can recall an incident in which this many horses have died at once."