BELLINGHAM, Washington (CNN) -- After 11 years of living illegally in the United States, it was not until Gerardo Arreola Gonzalez was nearly deported that he finally received permission to work here. 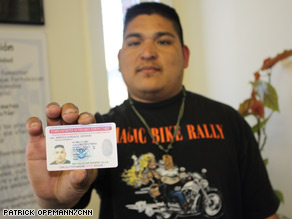 No longer illegal: Gerardo Arreola Gonzalez holds up the card authorizing his employment in the United States.

Arreola was one of 28 illegal immigrant workers arrested in February after agents from U.S. Immigration Customs and Enforcement raided a car engine repair business.

According to the immigrants, a small army of federal agents surrounded Yamato Engine Specialists in Bellingham Washington, and began searching for workers who could not show they had authorization to work in the United States.

"My blood ran cold," Arreola said in Spanish. "We went to the back door, but they were waiting for us. There was a bus already there, and they put us on it."

As he was being taken to an immigration detention center, Arreola said he thought of his wife and the five children they have had while living here and who are U.S. citizens by birth. He expected to be deported back to Mexico, Arreola said, and he was doubtful about when he would see his family again.

Watch Arreola and others discuss the raid »

Typically, cases like Arreola's end in deportation. According to ICE, some 5,173 people were arrested last year in similar worksite raids.

However, the Bellingham raid was the first of its kind to take place during the Obama administration. During the presidential campaign, then-candidate Obama's criticism of government immigration policies that split up families had given some people in immigrant communities hope that the raids would end if he were elected.

"Under the Obama administration, we didn't expect it to happen that people would be dragged out in handcuffs," said Rosalinda Guillen, a Bellingham immigrant rights advocate.

Many in the area strongly opposed the raid, Guillen said.

"This is a really heavy Obama-supporting county," she said. "So a lot of folks here had been in involved in the election." Immediately after the raid, she said, "the calls, the e-mails started and networks were activated."

Guillen said the controversy over the raid was featured heavily on Hispanic radio stations and that a charity called Los Niños Fund was created to help the children of the jailed immigrants.

Worksite enforcements, she said, should focus "on employers who intentionally and knowingly exploit the illegal labor market." Napolitano promised lawmakers that she would "get to the bottom" of what happened in Bellingham.

Napolitano's comments turned the heat up on the already boiling debate over how immigration policies should be reformed.

"Get to the bottom of what? Law enforcement officers enforcing the law?" asked Ira Mehlman of the Federation for American Immigration Reform, a nonprofit group that advocates more border security and decreasing the number of illegal immigrants entering the country.

"The message is if you are hiring illegal aliens, 'no problem.' If you are in the country illegally, unless you commit a serious felony we are not going to bother you, so it's a de facto amnesty," Mehlman said. "Even if the administration cannot get an amnesty through Congress this year, what they are going to do is through administrative decisions allow everybody to remain here and send the signal that more people are welcome."

Amy Kudwa, a spokeswoman for the Department of Homeland Security, said there was no policy shift and that other worksite immigration inspections had taken place since the Bellingham raid.

But Rosalinda Guillen said people in the pro-immigrant rights community were heartened by the fact that shortly after Napolitano ordered a review of the Bellingham case the immigrant workers who were still in immigration detention were released.

"I was just flabbergasted," Guillen said. And the same immigration agents who had arrested the workers, she said, now promised them visas that would allow them to work temporarily in the U.S.

"Homeland Security drove them to the place where they had to go to fill out the paperwork for the work permits," she said "That is totally unheard of."

A spokeswoman for the ICE Seattle office declined to comment on the case because the raid is under review and the investigation into the company where the immigrants worked is still ongoing.

The company did not respond to repeated CNN requests for comment, but a statement posted on its Web site reads: "It has been and continues to be Yamato's policy to hire people only if they meet the legal requirements for employment."

Several of the workers who were arrested said immigration agents have asked if they suffered any abuse while working for Yamato. Gerardo Arreola Gonzalez said the company did not mistreat him during the months he worked there soldering car engines.

But Yamato did not verify his immigration status when he first arrived at the company, Arreola said.

"I filled out my application and did the interview. They asked if my papers were good," Arreola said. "You say 'yes,' otherwise you don't get the job."

All About Immigration • U.S. Department of Homeland Security