(CNN) -- For Capt. Kamaljit Singh Kalsi, a doctor, and 2nd Lt. Tejdeep Singh Rattan, a dentist, this is a hill worth fighting for. 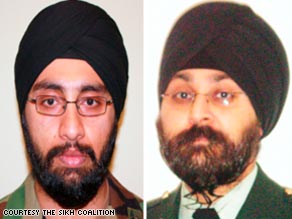 Tejdeep Singh Rattan, left, and Kamaljit Singh Kalsi are set to report for duty in the U.S. Army in July.

These two U.S. military recruits of the Sikh faith are challenging an Army order that they remove their turbans and cut their unshorn hair and beards when they report for active duty in July.

In Sikhism, which originated in northwestern India, the turban and unshorn hair are articles of faith and can't be removed.

But the U.S. military says there are times when the military cannot accommodate certain religious practices, "such as when those religious observations would interfere with the wear of proper military headgear or protective clothing or equipment."

"It doesn't make sense to me, especially in these hard times," Kalsi told CNN. "The military is hurting for professionals. They need doctors, they need nurses."

Aided by the Sikh Coalition, a national civil rights group, and a law firm, the men have filed requests that their religious needs be accommodated. They have filed appeals with their immediate superiors and complaints with the inspectors general of the Army and the Pentagon.

The Sikh Coalition said Kalsi and Rattan had been assured that when they were recruited to join the Army's Health Professions Scholarship that their unshorn hair and turbans "would not be a problem."

"Both men were both recruited and commissioned -- with their Sikh articles of faith -- during their respective first years of medical and dental school (2001 and 2006) through the Army's Health Professions Scholarship Program.

Amardeep Singh, the head of the Sikh Coalition, told CNN that the issue at hand involves observant Sikhs, not those Sikh-Americans who entered the military after removing their turbans and shaving their beards and hair.

The issue is all-important for the roughly 500,000-strong American Sikh community, which faced hostility after the September 11, 2001, attacks, when people associated them with al Qaeda terrorists because their turbans and beards resembled the militants' appearance.

"The perception is still there," said Singh. "We're sort of still feeling it."

He said surveys -- including one done recently in Queens, New York, where children reported being on the receiving end of verbal and physical abuse -- chronicle the problems Sikhs face.

Kalsi, Singh and the Sikh community stress the Sikhs' military heritage. Kalsi, for example, is the fourth generation in his family to serve in the military, and his ancestors served in India's military. The Sikh served in allied forces in the two world wars and they serve in the militaries of Great Britain, Canada, Sweden, Pakistan, as well as India.

The coalition notes in its letter to Gates that a Sikh doctor and dentist were serving in the Army, "grandfathered in under the old policy" that ended in the 1980s when observant Sikhs were barred from admission to the armed forces.

Lt. Col. Christopher C. Garver, an Army spokesman, told CNN in an e-mail that "the Army places high value on the rights of Soldiers to freely observe the tenets of their respective religions."

"Accommodation of a Soldier's religious practices must be examined against military necessity and cannot be guaranteed at all times," he wrote. "There are times when the Army cannot accommodate for religious reasons, such as when those religious observations would interfere with the wear of proper military headgear or protective clothing or equipment.

"The Army regulations which establish the standards of wear and appearance of the uniform and accommodating religious practices are in accordance with the Department of Defense Instruction on this subject," he said.

But the Sikhs want the Army to rethink and reconsider their situation.

"If they can come up with another policy that would allow Sikhs to serve, I guarantee you, they will have many, many people join from the Sikh community," Kalsi said.