(CNN) -- Tax day is an annual stress test for millions of Americans, but Wednesday's Internal Revenue Service filing deadline may be the toughest one yet for many who can't pay their mortgages or rent, let alone a big tax bill. 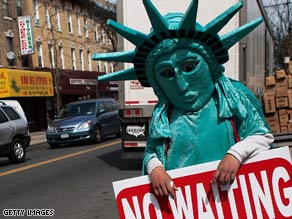 Jonathan Hermosa wears a costume this week to beckon customers to a tax service office in New York.

"Our message to taxpayers [is] that we're going the extra mile to help those of you in economic distress," IRS Commissioner Doug Shulman told the National Press Club in Washington on Monday.

"We want to get you your refunds as quickly as possible. And if you think you can't pay, please come in and let's talk about it. There are steps we can take to help."

iReport contributor Crystal Gress will need to follow some of those steps. The Coplay, Pennsylvania, bank call center employee said she doesn't know how she's going to pay the $1,200 she owes the IRS. It's the first time she's had a balance due on April 15.

"I'm really scared because I've never had to do it before," said Gress, 23. "I'm used to getting a return, but this past year has been really rough."

Watch who's more likely to get audited »

Gress adjusted her withholding last year to increase her take-home pay to cover bills; she intended the change to be temporary, but car repairs and other expenses kept coming up, she said. She used an estimating tool on tax preparer H&R Block's Web site and got the bad news.

The IRS reports these figures through the week ending April 3, with comparisons to the same week a year ago:

*More returns were filed in 2008 because of people seeking stimulus payments who otherwise would not file.

People who know they're getting a refund tend to file as early as possible, while those with a balance due tend to file late in the season, IRS spokesman John Lipold said.

"A lot of people who were getting refunds in the past are not getting them this year," said Brian Joubert, owner of L&B Tax Service with five locations in the Atlanta, Georgia, area and Houston, Texas.

Because his clients usually pay their preparation fees out of their refunds, Joubert's company has had to make changes to accommodate them, including cutting fees in select cases, holding checks until payday or taking payments in installments.

"We've had more people to pay with a credit card this year than I've ever seen," said Joubert, who has been in the tax preparation business for 12 years. "I feel like a department store in some sense."

The IRS has a monthly payment plan, but it comes with an upfront fee, stiff penalties and interest, making it more costly than a commercial loan.

But a loan isn't an option for Gress, whose credit rating is hurt by lingering debt from admittedly unwise earlier choices. After her monthly rent, utilities and car payment, "I barely have enough to buy ramen noodles," Gress said. iReport.com: Read more of Gress' story

She tried to refinance her $5,000 used car but was turned down, and getting a loan from her family is not an option, she said. Her fiancé doesn't make much at the auto body shop where he works, and she can't work a second job because of long hours at the call center and recent hip surgery. "I've been looking at every option to pay my taxes," she said, acknowledging she'll probably have to go with the costly IRS installment plan.

She won't be alone. Between 2 million and 3 million taxpayers a year follow that route, Lipold said.

Watch what protesters are planning for tax day »

Others in similar situations might consider filing for an extension, but they still have to pay extra on any balance not paid by midnight Wednesday.

"Bring your checkbook when you go to file an extension," said Amy McAnarney, executive director of the Tax Institute at H&R Block. "The tax that isn't paid by April 15 is subject to interest and penalties, so it's best to pay as much as you can even if you are requesting an extension."

In rare cases, the IRS will negotiate with the taxpayer and settle for a smaller amount in what is called an offer in compromise. In 2008, the agency worked out 11,000 offers in compromise (out of about 150 million individual returns) worth about $200 million, Lipold said.

"The IRS understands that a lot of people are having problems right now economically and is willing to work with them," he said. "If you're having a problem, call now."

Watch how your car could earn you a tax break »

In contrast to Gress, Joe and Patty Lewis are getting a large tax refund for the first time. The Willow Grove, Pennsylvania, couple are due $7,000, which they said they hope will help save their home, which is in foreclosure.

Joe Lewis' job as a senior systems analyst was eliminated in January 2008, and at 56 he hasn't found anyone willing to hire him. His $1,800 monthly unemployment benefit -- of which $900 goes to COBRA health care coverage -- runs out at the end of April. iReport.com: Watch Patty Lewis' iReports

Patty Lewis, 55, is a former executive with a furniture company who is disabled and no longer able to work. She first shared her story on iReport.com.

The $7,000 is mostly a refund of the penalties they paid when they cashed in Joe's 401(k) and a deduction for their considerable medical expenses, Patty Lewis said.

The Lewises are in talks to take that money and a lump-sum payment of her private long-term disability insurance and make a deal with their lender to settle their mortgage debt, she said.

"If I cash it in, I'll be screwing myself by a couple hundred thousand dollars," she said. "But if it's something that's going to save me from foreclosure, I'm willing to do anything I can to secure my home. I'm offering my lender everything that I possibly have. I'm praying to God."

Until Joe can find a job, "I'm going to have to live on $900 Social Security a month, which is going to be extremely difficult, but our house is everything to us and it's the only thing that I have to offer," she said. Their property taxes are $500 a month, she noted.

The couple has filed for mortgage assistance available through national economic stimulus legislation, but Patty Lewis said she doubts they'll get it.

"The administration is not looking at people who have been out of work since this recession started -- December 2007, January 2008. That's when my husband lost his job. And they know that a huge part of foreclosures is due to job loss, but yet they still keep addressing the subprime and adjustable-rate victims," she said. "And there's nothing out there for us at all. ... How can they structure the payments in order for you to pay that mortgage payment every month?"