(CNN) -- A man who landed a plane with the assistance of air traffic controllers after the pilot fell unconscious and died said Monday he was "still in a daze of adrenaline." 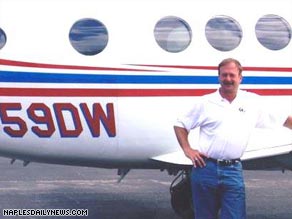 Doug White said he is certified to fly a single-engine plane, but had no idea how to fly the large turboprop.

"I'm grateful, thankful to be alive," Doug White of Archibald, Louisiana, told CNN affiliate WINK. "I'm glad my family is safe, but let's don't lose sight of the fact that a man died, and I don't want people to forget that."

White, his wife and two daughters were flying from Marco Island, Florida, to Jackson, Mississippi, on Sunday after attending a funeral for White's brother.

White recalled watching and listening as the pilot, Joe Cabuk, conducted his "climb checklist" upon takeoff from Florida. After the checklist was complete, he said, Cabuk laid his book down.

About a minute later, White told WINK, he looked at Cabuk, and "he was just sitting there. He had his chin on his chest, looking down at his lap, but there's nothing in his lap that he needed to be looking at."

"That's when I kind of looked at him for a minute, probably two, three seconds, and I touched him on the shoulder. I said, 'Joe! Joe!, and that's when his head rolled over to the side, and his eyes rolled back in his head, and his arm fell off the armrest ... and I knew if he wasn't gone then, he was in deep distress, but we were in trouble."

The plane's autopilot was on, and the plane was at about 5,000 feet and climbing, White said. Although he was a certified single-engine pilot and had about 130 flying hours, he had no idea how to fly the much larger Super King Air two-engine turboprop plane.

"The only thing I knew how to do up there was talk on the radio," White told WINK. "I've only been up there (in the cockpit) one other time. I made it a point to ask the pilot -- not Joe, but another one -- 'How do I talk on the radio?' and they showed me what button to push."

He told his daughters, " 'Y'all go back there, and I want you to pray hard.' The wife kind of trembled and shook the whole time, and the youngest daughter, Bailey, cried and squalled, and the oldest daughter, Maggie, vomited and threw up three or four times."

Although White sounded fairly calm, some tension is evident on recordings released by the Federal Aviation Administration as controllers at Fort Myers, Florida, attempted to talk him through landing at the airport there.

At one point, a controller asked whether the autopilot is still on or whether White is flying the aircraft himself. "Me and the good Lord are hand-flying this," White replied.

He described his mindset as being one of "focused fear."

"I had a 10,000-pound gorilla by the hand, and it wasn't wanting to cooperate," White recounted to WINK.

Asked about his mindset, White said, "I lost it" after landing. His emotion can be clearly heard on the recording as he told air traffic controllers in a shaky voice, "We're down, buddy. Thank you."

Air traffic controllers at Miami Center helped White at first, talking him through disengaging the autopilot, turning the plane and beginning his descent. They then handed the plane over to air traffic control at Fort Myers' Southwest Florida International Airport.

It was a Fort Myers controller who called Kari Sorenson of Danbury, Connecticut, for help in talking White down. A veteran pilot and flight instructor, Sorenson is intimately familiar with the plane White was flying.

"We started providing him with positions of controls, switches, how to configure the aircraft for landing," Sorenson told CNN affiliate WTNH in Connecticut.

Sorenson said he was told that the plane was down and that the controller would call him back. But he said he spent a few tense moments because he didn't know "if he was down in a positive or negative way."

Sorenson credited the air traffic controllers for working as a team in helping White land. "It was a team of people, and a good team at that," he said.

"The husbands and the wives of air traffic controllers have no idea what their spouses do for a living," White said. "They have no idea, particularly in a busy airspace like Miami or Fort Myers ... they don't make enough money for what they do, the service they provide."

He said, "when something good happens, (air traffic controllers) don't get the high five and the 'attaboys.' I'm gonna give them the attaboy, and I'm going to send them all notes."

He said he would also send them restaurant gift certificates so they can take their friends or family out to dinner.

But while he is grateful, White said, he is also saddened at Cabuk's death. "Joe Cabuk was a father, he was a husband, he was a grandpa, he was a pro at what he did, he was a Christian, he was a great guy and he loved to fly ... this is not all about me. Joe Cabuk died."

The cause of Cabuk's death has not been released. The Federal Aviation Administration has not given any of the involved air traffic controllers permission to speak about the incident.