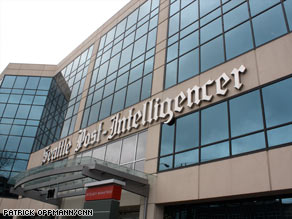 The Seattle PI.com website will be run out of the same iconic headquarters in downtown Seattle.

The chain that owns the Los Angeles Times and the Chicago Tribune is in bankruptcy. Other papers, large and small, are teetering on the brink.

On Monday, the Ann Arbor (Michigan) News announced that it will publish its last edition in July. Taking its place will be a Web site called AnnArbor.com.

Three other Michigan newspapers announced Monday they are reducing their publications to three days a week. The Flint Journal, The Saginaw News and The Bay City Times will publish print editions on Thursdays, Fridays and Sundays, according to the mlive.com Web site, as research shows those are the highest readership days for newspapers.

And the Charlotte Observer announced Monday it will cut its staff by 14.6 percent and reduce the pay of most of the employees it keeps.

The situation now looks grim for The Tucson Citizen. In the past 25 years, circulation at Arizona's oldest newspaper has dwindled from 65,000 to 17,000. The Gannett Co. paper could fold if a buyer can't be found.

At least 120 newspapers in the U.S. have shut down since January 2008, according to Paper Cuts, a Web site tracking the newspaper industry. More than 21,000 jobs at 67 newspapers have vaporized in that time, according to the site.

More bad news could be coming this week as newspapers struggle to meet challenges posed by changing reader habits, a shifting advertising market, an anemic economy, and the newspaper industry's own early strategic errors.

Amid the decline comes concern over who, if anyone, can assume newspapers' traditional role as a watchdog. For more than 200 years, that role has been an integral part of American democracy.

"I know it sounds somewhat cliché, but when you have competition with [the Arizona] Star, it makes both entities better," said Jennifer Boice, an editor who has devoted more than 25 years of her life to the Tucson Citizen.

"The winner is the community," Boice said. "They get better information quicker and more of it."

Despite arguments like Boice's, newspapers are losing their relevance in the lives of a majority of Americans, particularly younger readers.

Many industry analysts agree many more papers will soon become extinct. Most two-newspaper towns will likely disappear, perhaps by the end of 2009, some experts say.

Among the next newspapers to go, experts say, are major metropolitan dailies relying on an expensive business model that requires costly newsprint consumption and gas-guzzling deliveries.

The quirky San Francisco Chronicle is reported to be circling the drain. If it were to close, San Francisco would be the first big U.S. city without a major daily paper.

The Atlanta Journal-Constitution and the Boston Globe are bleeding about $1 million a week, according to a media report issued by the Pew Center for Excellence in Journalism. Experts say more big-city papers are expected to follow the example of Gannett's Detroit Free Press, which started cutting back on print edition delivery in December.

The challenges facing newspapers long predate the worst economic slump since the Great Depression. Daily subscriptions per household began a steady decline in the 1920s, yet the newspaper industry adapted and thrived despite competition from radio and television.

But easily accessible, high-speed Internet connections and smart phones have dramatically shifted the way people get their news. Ironically, news is still in strong demand. It's abundant, accessible and usually free on the Web.

The outlook is so grim that the American Society of Newspaper Editors, a membership organization for daily newspaper editors, canceled its annual convention in April after deciding that "the challenges editors face at their newspapers demand their full attention."

To understand the financial crises plaguing the industry, one need look no further than the Tucson Citizen's parent company, Gannett, which reduced its work force by 10 percent only to see advertising and profits continue to plummet.

Things are no better at competitor McClatchy Co. The company eliminated 1,600 jobs companywide last week. McClatchy stock is trading for less than $1 a share compared with $70 a share five years ago. iReport.com: Sad to see Seattle Post-Intelligencer go

The industry's advertising revenue in 2008 was $38 billion, a staggering 23 percent drop from $49.5 billion the year before. Print media companies are failing to achieve market expectations each quarter, scaring away investors, venture capitalists and potential buyers in droves.

Still, a few deals have been struck. This week, a private equity firm in California purchased the San Diego Union-Tribune -- where advertising revenue has fallen 40 percent since 2006 -- for an undisclosed price.

"We think that the revenues from newspaper companies have been insufficient to cover their cost," explained Mike Simonton, an analyst at Fitch Ratings, who issued a negative outlook on the industry. "At that point they will need to tap into external financing to continue operations, and we believe external financing will be prohibitively expensive or not even available at all."

Job cuts are keeping many newspapers on life support.

Paul Gillin, a social media consultant, said such losses are to be expected for an industry that has failed to adapt to the influx of online publishing tools and social networking sites.

"Information has become democratized today," said Gillin, who has predicted print newspapers will disappear by 2015. "You get a lot of advice from your friends, blogs and multiple media sources. Who reads just one newspaper?"

Some of the biggest threats to newspaper profits have come from Web sites like Craigslist and Monster.com, online advertising venues that are chipping away at newspapers' classified ad sections.

Newspaper classified ad expenditures tumbled nearly 17 percent in 2007, according to the Newspaper Association of America. The recession is affecting auto dealerships, real estate companies and other local businesses, accelerating the advertising downturn.

Many newspaper experts expect national publications such as the Wall Street Journal, USA Today, The Washington Post and The New York Times to survive. They say the largest papers could even benefit from industry woes and grab market share because of their wide penetration.

In the meantime, these papers are facing a harsh economy. At The Washington Post, owned by Washington Post Co., earnings plunged 77 percent in the fourth quarter of 2008. The newspaper was saved by the parent company's Kaplan educational division, which raked in more than half the company's revenue that year.

The future offers the industry little comfort, with studies showing newspapers have lost a generation of young readers. A Pew Research Center report this month found only one-third of Americans polled say they would "miss" the newspaper a lot if it were no longer around.