(CNN) -- Cafe owner Sam Lippert has come up with an innovative way to cope with the recession: He's done away with pricing and simply asks customers to pay what they want. 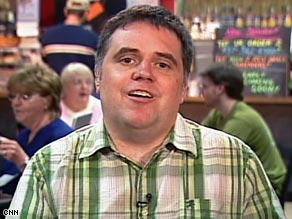 Cafe owner Sam Lippert says people have to look him in the eye and say what they think their meal was worth.

Lippert says sales and customer count has increased markedly since the change, and he's looking at adding more staff.

Lippert spoke Tuesday with John Roberts on CNN's "American Morning" about how he came up with the idea and how customers have reacted. Following is a transcript of their conversation:

Sam Lippert: Well, actually, that was thanks to my girlfriend. She is from Bulgaria, and she says it's a common practice in certain cafes in Europe to allow the patrons to decide how much to pay for their meal.

Watch Lippert explain how his no-price plan is working »

Roberts: So, in terms of paying for something, if somebody gets a sandwich or maybe a bowl of soup or something like that, typically how close to the old menu price would they get in what they pay?

Lippert: Well, you know, they have to look me in the eye and say that that's what they think is fair. And, you know, that's a big incentive. When someone's at the counter and you say, you get to pay what you think is fair, very few people are going to take advantage of that situation.

Roberts: Interesting. So, let's just set the stage for people here. You bought the cafe in April of 2008. In the early going, business was up 10 percent over the previous owner. Then what happened when the recession really took hold?

Lippert: The bottom just fell out. I mean, I was still matching the previous owner's sales, but that was not where this business needed to be in order to make it.

Roberts: All right. So, why did you think that taking prices off the menu would be a boon to your business?

Lippert: Well, I figured in the current times, people need a reason to go out and treat themselves. You know, you've got everybody saying, "Well, if you need to save money, don't buy a cup of coffee out, stop buying lattes." You know, don't go out and buy lunch, take your lunch. And I'm trying to give people incentive to actually go out and eat or go out and get a cup of coffee, because they get to pay what they feel is fair.

Roberts: Now, we should point out to people, too, you're not the typical cafe owner. You're an engineer by trade. You went to school at MIT. You took all of your 401(k) savings out to buy this cafe. It looked like business might be going under. But since you adopted this no-price menu, how's business been?

Lippert: Things have picked up. My sales and customer count are up on a given day between 50 [percent] to 100 percent. And I'm starting to look at being able to bring some of my part-time people on full time and maybe being able to add a couple of new employees.

All About Recessions and Depressions • Ohio