(CNN) -- Ten co-workers from New Jersey say they will split a $216 million Mega Millions jackpot, thanks to the five bucks they each kicked into a pool. 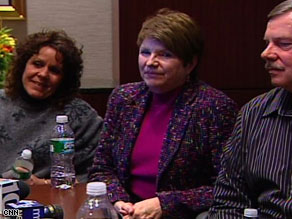 Melanie Jacob, Linda Harrington and Bob Space, who bought the tickets, are three of the lucky winners.

The 10, who work for Chubb Commercial Insurance in Whitehouse Station, New Jersey, held a news conference Wednesday to announce their win.

"I checked and I rechecked and then I sent it to my wife," said Space, who purchased 50 sets of lottery numbers for himself and his nine co-workers from a Singin Oil gas station near his house on Monday.

Space went to work as usual on Wednesday morning, playing it coy.

"I got an e-mail," said Todd Ellis, the company's chief information officer. "It said, 'We won the big one' and then he just put the numbers down."

Joanne Roth got the same e-mail.

Space played hardball with co-worker Oscar Oviedo, who hadn't paid him yet for his share of the lottery tickets.

"This morning, I come into work early with him," said Oviedo, who soon received an instant message from Space. "I got a surprise for you. Come over," the message said.

"He's like, 'You got my money?' " Oviedo said he thought, "Wow, that was rude," but paid up. Space shook his hand and said: "Now you're a millionaire."

They aren't officially millionaires at this point, because the winning ticket hasn't been presented to lottery officials yet.

"In due time," Space said. "We have a year." But another Chubb employee said they'll cash in their ticket soon.

"If you have that winning ticket ... please sign the back of the ticket, put it in a safe place and seek legal and financial advice before you come to talk to us," New Jersey Lottery spokesman Dominick DeMarco said at the news conference, held at the gas station where the winning ticket was sold. "Be careful with it."

None of the co-workers, who have been with Chubb for seven to 30 years, said they had immediate plans to quit. The ticket is worth an estimated $216 million if the money is paid out over 26 years, or about $140 million if they choose an immediate cash payout.

"It relieves a lot of stress ... and it also gives a nice cushion to be able to help the people we want to help," Ellis said. "I feel incredibly blessed. I can't even absorb it at this point."

All About New Jersey • Lottery Results