(CNN) -- Boeing is asking pilots who fly its 737 jets to pay careful attention to flight instruments after Dutch investigators said a faulty altimeter contributed to the recent crash of a 737 in the Netherlands. 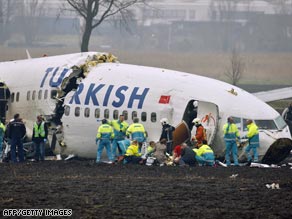 The 737 is the most widely flown jet in commercial aviation. More than 6,000 have been sold, according to Boeing.

On February 25, Turkish Airlines Flight 1951 from Istanbul to Amsterdam dropped from the sky on approach to the landing strip at Schiphol Airport, breaking into three pieces in a muddy field.

Nine people died and 80 people were hurt in the accident.

In a memo to pilots, Boeing says there was a malfunction in one of the plane's two altimeters, which measure the altitude above the terrain where the plane is going to land.

The left altimeter was giving "erroneous" information, indicating that the plane was below 7 or 8 feet from ground level when it was actually about 2,000 feet in the air, the memo said.

That caused the automatic throttles to slow the plane down.

"Boeing recommends operators inform flight crews of the above investigation details and the (Dutch Safety Board) interim report when it is released. In addition, crews should be reminded to carefully monitor primary flight instruments," the memo said.

The plane was on automatic pilot when it crashed, said Pieter van Vollenhoven, head of the Dutch Safety Board.

The weather was misty at the time of the crash, possibly keeping the pilots from noticing their altitude, Van Vollenhoven said. Automatic pilot should not be used for landings if altimeters are malfunctioning, he said. Dutch investigators said there had been faulty meter readings on two other flights of the same jet, but the pilots were able to land.

In the Amsterdam crash, the pilots did not recognize the altimeter problem until it was too late, Van Vollenhoven said.

The Boeing memo notes that "the autothrottle, which uses the left radio altimeter data, transitioned to landing flare mode and retarded the throttles to the idle stop. The throttles remained at the idle stop for approximately 100 seconds during which time the airspeed decreased to approximately 40 knots below the selected approach speed."

Proulx said he did not know what that speed was for that particular 737 model.

The warning issued by Boeing was for many other models of 737 jets, not just the 737-800 involved in the Amsterdam crash.