Editor's note: This report has been prepared in collaboration with the investigative journalism organization Propublica.org. 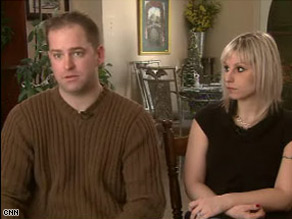 Michael and Michelle O'Neil say they tried to make good on their bad checks but were told it was too late.

DETROIT, Michigan (CNN) -- Michelle O'Neil and her husband Michael are young, scrambling to stay afloat financially and, by their own admission, not the best money managers.

Both acknowledge they wrote two bad checks, totaling about $200, as they were moving from Florida to Michigan in late 2007. The bad checks, they say, were mistakes. But nearly a year after they settled in a Detroit suburb, letters and phone calls followed from Florida.

"They told me they were part of the attorney general's office," Michelle O'Neil told CNN. "And that was scary in the sense that I've never had any legal problems. I'm a teacher."

But the calls weren't coming from a state agency. They were coming from a company hired by a Florida county prosecutor's office to collect on bounced checks.

The firm -- American Corrective Counseling Services, or ACCS -- splits the money it collects with the prosecutor's office. But it also makes money from financial management courses that people who wrote the checks are required by law to attend at their own expense. And the company's contract with the prosecutor's office states those classes are its "principal business activity."

The $14 check Michael O'Neil wrote to a Florida drugstore ended up costing him $285, including the $160 class fee.

O'Neil said he and his wife tried to make good on the checks with the merchants involved and pay any fees required. But he said the companies told him it was too late -- they had turned the matter over to ACCS.

The couple had been in Michigan for 10 months before they got their first notice from the company, which warned that "the State Attorney will not discharge the report(s) of criminal activity against you until all program requirements, including attending class, have been met."

"They make you feel like a criminal," Michael O'Neil told CNN. "They try scare tactics, harassment and everything. And you take a look and ask, 'Seriously, is the attorney general of Florida after me for a $14 bounced check?' "

The short answer is yes. Prosecutors are outsourcing some of their bad-check collections to companies like ACCS.

But Jennifer Osborn, a California student who bounced a $92 check to her college bookstore, said the company's money-management class was useless to her.

"It was boring. It was pointless," Osborn told CNN.

Congress changed federal law in 2006 to allow district attorneys' offices to contract out bounced-check collections to private collection firms like ACCS. Prosecutors hire them as part of pre-trial diversion programs aimed at keeping people like the O'Neils from going to court, and in Florida, educational courses are required parts of those programs.

But the practice has drawn criticism from the consumer watchdog group Public Citizen, which has filed lawsuits in three states to stop it. Deepak Gupta, the group's chief attorney in Washington, said companies like ACCS are effectively "renting out the prosecutor's seal" to collect money on cases prosecutors would not otherwise pursue.

"ACCS doesn't really care about these classes, about teaching people how to balance their checkbooks," Gupta told CNN. "It's really about collecting their fees."

ACCS, based in San Clemente, California, says it has contracts with prosecutors' offices in 17 states. In court papers, it says its actions are reviewed and authorized by local prosecutors, and calls its classes "remarkably successful."

"Less than 2 percent of the persons who complete the course commit repeat bad check offenses," it states.

In Los Angeles County, the largest prosecutor's office with an ACCS contract, supervising attorneys say they have had no complaints about the firm. Assistant District Attorney Sharon Matsumoto told CNN that the contract helped the county collect on 80,000 bad checks, bringing in $2 million in 2008.

"This particular function is one that we can legally outsource to a company experienced in doing this," Matsumoto said.

But another metropolitan prosecutor said he was wary of private debt collection firms acting on behalf of law enforcement.

"I did not favor the concept of having some office outside of the DA's office that would make contact with the public, and those folks would not be employees of the district attorney's office," said Paul Howard, the district attorney for Fulton County, Georgia, which includes Atlanta. "I felt that there should be a level of accountability that the program did not present."

In lawsuits filed in California, Indiana and Florida, Public Citizen accuses ACCS of violating the federal Fair Debt Collection Practices Act by moving against people without establishing probable cause, as prosecutors would be required to do.

"In fact, in many cases, stores are sending these checks directly to ACCS, and ACCS is sending out collection letters with prosecutor letterhead, and no prosecutor has actually reviewed those cases," Gupta told CNN.

But ACCS attorney Charles Jenkins said that probable cause "is already established because of what the prosecutor requires of the submitting merchant" -- namely, an affidavit stating that the check bounced, and efforts to obtain its money from either the purchaser or the bank had failed. When the firm decides to send out its initial mailings, "it is already a matter for the local prosecutor," Jenkins said.

And according to court records, the form letters have been approved by prosecutors.

The National District Attorneys Association lobbied Congress for the legislation that allowed such contracts, arguing that its members would be able to resolve bad-check cases more efficiently under the new law. The measure was part of a lengthy 2006 bill overhauling financial regulations, which passed both houses of Congress unanimously.

"The way it had been represented to us is that it was a way to avoid criminal prosecution," Rep. Barney Frank, now chairman of the powerful House Financial Services Committee, told CNN. "So I would be surprised if someone were to be prosecuted for one check for a few dollars."

Frank, D-Massachusetts, said the complaints raised by people with the collection process were "the first time this has been brought to my attention," and he told CNN that perhaps the law needs "some looking into."

ACCS recently filed for bankruptcy protection, a day before a federal judge in Florida was to hand down a ruling in one of the lawsuits filed against it. In court papers, the company named the law firm it hired to defend itself as one of its largest creditors. ACCS is still doing business, however.

As for the bad check writers, those interviewed by CNN say they had no criminal intent. Their sin was poor math or bad money management.

"I am disappointed in the system," Osborn told CNN. "It should not have happened at all."

All About Public Citizen Foundation