CLEARWATER, Florida (CNN) -- One of four missing boaters was found Monday clinging to an overturned fishing vessel off Florida's Gulf Coast, and the search for the other three, including two NFL players, has narrowed, the Coast Guard said. 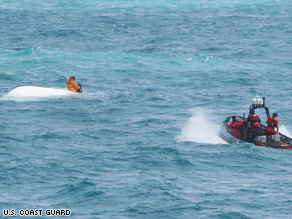 "We now know we are looking for persons in the water, not a boat," said Coast Guard Capt. Tim Close.

Nick Schuyler, a former University of South Florida football player, was the only person still with the small fishing boat when a Coast Guard cutter came across it about 50 miles west of Clearwater Beach on Monday, the Coast Guard said.

Schuyler told his rescuers that the boat was anchored Saturday evening when it was overturned by waves during a storm, Close said. He told them that all four men were clinging to the boat for a time, but became separated, Close said.

The four men embarked in a 21-foot single-engine boat from the Seminole Boat Ramp near Clearwater Pass about 6:30 a.m. Saturday, the Coast Guard said. The search was launched early Sunday after friends and relatives realized they had not returned from their fishing trip.

Schuyler appeared to be conscious and talking in video showing him being removed from a Coast Guard helicopter Monday afternoon.

Watch Schuyler being moved on stretcher »

Although he was initially able to answer a few questions to help with the search for the three missing men, officials decided to wait until he was treated for hypothermia before talking with him again, Coast Guard Petty Officer Robert Simpson said.

Schuyler's parents, Marcia and Stu Schuyler, told reporters in Florida on Monday they were ecstatic that their son had been found alive. But Stu Schuyler said his "heart is still out" for the three missing men.

"We're not going to talk too much until we find these guys. We're all praying for them," Stu Schuyler said.

The Air Force Reserve sent a C-130 airplane and a Pave Hawk helicopter to assist the Coast Guard's search, which also included several other helicopters and airplanes. Three Coast Guard cutters were also on the water, Close said.

Rough seas and high winds that hampered the search Sunday continued Monday. The Coast Guard reported winds of 15 to 20 knots and waves up to 9 feet in the search area Monday.

Cooper said she became worried Saturday night when she didn't hear from her husband. She called her husband's fishing buddy, Brian Miller, who contacted the Coast Guard with the coordinates of where the men planned to fish.

"Usually I'm on the boat. It's a little difficult wondering if something would have been different if I had been there," Miller said.

He said it was clear something was wrong when Cooper didn't call Saturday night.

"He should've been within range to use his cell phone, and he knows enough to shut it off when he goes out so the batteries are still there," he said.

Rebekah Cooper said her husband was aware of Sunday's weather forecast and for that reason picked Saturday for the trip.

"Fishing is his first love, it always has been," she said, adding, "I have a lot of faith in him out there."

Cooper's father said he learned of the situation Sunday morning from Rebekah. His son "routinely stays out on the water 12 to 14 hours," Bruce Cooper, a sports anchor for CNN affiliate KPNX-TV in Phoenix, Arizona, said in a statement.

He called his son an "avid fisherman."

"He goes deep-sea fishing any opportunity he gets," Cooper said in the statement. "Two years ago, I went deep-sea fishing with him. I swore I would never do so again; I didn't like the fact that I couldn't see land. Needless to say, I am very concerned. I am praying and hoping for the best."

Smith and Cooper were teammates with the Tampa Bay Buccaneers for part of the 2004 season, when Cooper was a rookie, according to the NFL's Web site. Smith, who entered the league with Tampa Bay in 2002, went on to play for the Washington Redskins before moving to the Lions for the 2006 season. Cooper has played for six teams in his five-season career.

Bleakley lettered from 2004 to 2006 as a tight end for the University of South Florida, according to a spokesman for the university's athletics department. Schuyler was a walk-on defensive end for the school in 2006, but he never played in a game, the spokesman said.

Schuyler's father told reporters Sunday that the four men knew each other from working out at a gym, and that his son had accompanied Cooper and Smith on a fishing trip last week that lasted 15 hours.