SAN FRANCISCO, California (CNN) -- Every Thursday afternoon, the San Geronimo Valley Community Center opens its doors to the needy. It becomes a food bank to serve the most vulnerable citizens of Marin County, California. 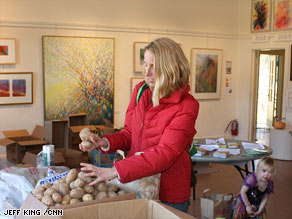 Bread, fruit, canned vegetables, meat and cereal are all available for free.

Here in the San Francisco Bay Area, as well as nationwide, more people are coming to food banks. In 2008, demand for emergency food assistance went up by 30 percent compared with the previous year, according to Feeding America, a national hunger relief charity.

Given the economic downturn, it is not surprising that food banks are seeing more traffic. But workers at the San Geronimo center are surprised by some of the new faces.

"We have people in marketing and software. We have a lot of Realtors that live out here. So those are the people we're seeing for the first time," said Dave Cort, the center's executive director.

Claudia Bartram, 59, was terrified to walk in the door and nearly broke out in tears when she asked a worker how she could get food. "It's humiliating to find yourself in this situation. I grew up in a privileged lifestyle," she said.

Bartram, who is divorced and without children, said she made a comfortable living as a sales representative in a variety of industries. She said the stock market wiped out a large portion of her nest egg. And things got worse a few weeks ago when she lost her job as a representative for an in-home care provider for senior citizens.

She said she's using what's left of her savings to pay the mortgage on her $350,000 condominium.

"You keep thinking you're an intelligent person. I had so much. How did I lose it?"

Food bank workers say it's common for people to be apologetic, especially those who were making six-figure incomes. "Now, all of a sudden, they're coming to us," said Larry Sly, the director of the Food Bank for Contra Costa and Solano counties.

Sly estimates that 10 percent of those coming to food banks in his area are new people. So far, he says, his food bank has been able to keep up with the demand.

The food there is mostly donated from local grocery stores and the United States Department of Agriculture. A typical visit will provide about $50 worth of groceries.

"You know at least you're offering folks help. It's not the answer to their problem. They need a job. To the extent we give them food, it makes a difference, " Sly said.

Bartram hasn't decided if she'll go back for more assistance. She says she finds the whole thing sad and ironic because she used to donate to food banks.

"I have much more empathy for people who can find themselves in this kind of situation because I see how easily it happened to me. I can certainly understand how it happened to other people, " she said.

One food bank volunteer said that these days, the lines for food will tell you everything you need to know about the economy.