WASHINGTON (CNN) -- A federal anti-terror law that requires longshoremen, truckers and others to submit to criminal background checks has ensnared another class of transportation worker -- mule drivers. 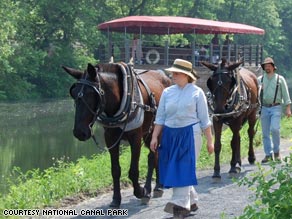 Yes, so-called mule skinners -- in this case, seasonal workers who dress in colonial garb at a historical park in Easton, Pa. -- must apply for biometric Transportation Worker Identification Credentials (TWIC), according to the Transportation Security Administration, which says it is bound by federal law.

The requirement has officials of the Hugh Moore Historical Park perplexed.

"We have one boat. It's pulled by two mules. On a good day they might go 2 miles per hour," said Sarah B. Hays, the park's director of operations.

The park's two-mile canal does not pass any military bases, nuclear power plants or other sensitive facilities. And, park officials say, the mules could be considered weapons of mass destruction only if they were aimed at something resembling food.

In December, Hayes wrote to Rep. Charles Dent, R-Pennsylvania, about the requirement. Dent, in turn, wrote to the TSA requesting a waiver, noting the mode of transportation involved was "mule-drawn canal boats."

"We encourage the crew members... who possess Coast Guard mariner credentials to obtain a TWIC at their earliest convenience to comply with these requirements and not risk suspension or revocation of their other credentials," the TSA wrote.

"Now Hank and George, while sometimes are ornery, they are not terrorists," Dent said. Napolitano said she would try to be flexible.

"Obviously this is a picture designed to say 'Hey, isn't it absurd that they be required to have TWIC cards.'" Napolitano said. "Um, let's work with you on this particular case, if we might."

"I think the rule was written and the policy was set up for all the big shipping, and they never even considered something outside the normal bounds," Hays said.

Dent said he will work on a "common sense" solution with Napolitano.