Editor's note: CNN has asked its journalists across the country to offer their thoughts on how the economic crisis is affecting their cities. In this installment, All Platform Journalist Jim Spellman reports from Denver, Colorado. 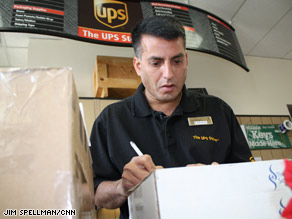 Hari Dallakoti says business at his UPS store in Denver, Colorado, is down 25 percent.

DENVER, Colorado (CNN) -- The conventional wisdom here in the Mile High City is that Denver entered the recession early and is pulling out of it ahead of the rest of the country.

Time and again I have heard politicians, journalists and business people tell me that it isn't so bad here, that Denver is poised to lead the nation in an economic recovery. Maybe, but the signs on the ground are a little harder to read.

Down on Broadway I stop by a UPS store a couple of times a week. The owner's name is Hari Dallakoti.

Dallakoti always has a smile on his face and seems to know all his customers by name -- he was calling out to me by the second time I entered the shop. People drop by to ship out packages, make copies and pick up deliveries.

There is always a crowd when I have been in, but Dallakoti tells me business is down 25 percent this month versus the same time last year.

"Finally it's hitting in this area, and I believe that people are afraid of spending money," he says. "It's like a ripple effect, and I think I am feeling it now."

Dallakoti says customers who once sent birthday presents across the country are now only sending cards. Also, eBay-related shipping is down, and he has seen a falloff in people sending mortgage-related documents. He has five employees and says he hasn't had to let anyone go, but he has had to cut back their hours.

He agrees that business is better in Denver than in other parts of the country and is confident he will weather the economic storm, but it may be a while before things get better for him.

"In my opinion it's going to get worse for the next couple, three months, and I'm hoping it will turn around after June," he says.

Watch how the downturn is affecting Denver »

A block up Broadway is a little guitar store called Music Gear Guys. I play guitar, and this was one of the first businesses I stopped by when I moved to Denver in January. I have been in the shop four or five times and have been surprised that every time I drop by, the place is packed.

"The recession affected us a little last year but overall -- knock on wood -- it hasn't really affected me too much," says owner Gregory Decker, who thinks the recession may actually be helping his business.

"I have a feeling that people are looking for hobbies or different forms of entertainment that aren't too expensive," Decker explains. His store is crowded with new and used guitars, amplifiers and accessories.

He says guitars based on designs from the 1960s are the hot items in the store. Like Dallakoti, the UPS store owner, Decker seems to know all of his customers by name. He says that in this economy you have to focus on customer service to stand a chance. He doesn't advertise, instead relying on word of mouth, and keeps overhead low: He is the sole employee.

"Relationships are what make my business thrive. Without them I wouldn't be as successful," he says.

But even here in a relatively successful small business there are signs of the hard times other people have been experiencing. Beginning last year more customers started coming in to sell Decker their guitars in hopes of making ends meet.

"A lot of people are selling their gear due to job layoffs and needed the money," he says.

The recession started with free-falling housing values and, in this respect, the signs are harder to read.

Over the weekend I took my dog for a walk through my neighborhood near Sloans Lake in Northwest Denver and decided to count how many houses were for sale. In a six-block walk, I counted two houses for rent and 13 for sale, including the house next door to me.

These homes sit like ghosts in the neighborhood. There are open houses on Sundays, but few people come by. The houses are all well-maintained, though most of them appear to be empty. My neighbors hope these places don't fall into foreclosure; they are worried the neighborhood will fall apart if they do.

I'll be keeping my eye on the house next door, and keeping my fingers crossed that my new hometown will be back on track soon.