WASHINGTON (CNN) -- U.S. political, business and environmental leaders urged the nation Monday to act quickly to build a unified, national electricity grid, both to diminish the impact of global warming and to boost the economy. 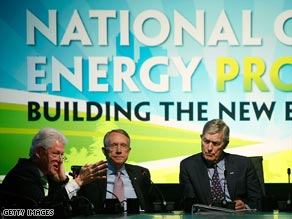 "We need to move with a sense of urgency," Energy Secretary Steven Chu said at a forum called the National Clean Energy Project: Building the New Economy, which was hosted by the Center for American Progress Action Fund.

Countries in Asia are outpacing the United States in such work, which includes more efficient power transmission lines, he said.

The Department of Energy plans to invest in research to devise better means of increasing and decreasing the voltage that flows along those lines so that communities can tap into "off-ramps" built into the power highway, much as they can use off ramps designed into the nation's interstate highways, Chu said.

But, under a smart system, electricity would be able to flow in more than one direction, he said, adding that his agency plans to invest in ways to tap into solar and wind power to create grids that can support two-way flows of electricity.

The biggest bottleneck, he said, is the failure of industry to agree on a single standard so that different systems could interact with one another.

"What we really need is to lock these people up in a room and say, 'Come out with a standard in a few weeks.' "

Until such a standard is set, community leaders will be reluctant to invest in the kinds of smart grids that will conserve energy, reduce dependence on foreign oil and slow global warming, he said.

He praised civic leaders in Boulder, Colorado, for their "act of courage" in moving forward nonetheless.

That's because, when a standard finally is set, the city's investment in a smart grid "may be obsolete," Chu said.

Former President Clinton warned that a failure to come together on a national plan "will compromise our national security" and hurt the nation's economy.

Previous efforts, he said, have failed as prices for imported oil have fluctuated.

"Every time oil dropped, people said, 'Gimme my Hummer back,' " Clinton said. "That's not what they're saying now. ... We know this is the key to our job growth."

He called for some of the money being poured into the economy by President Obama's stimulus plan to be directed toward boosting the nation's ability to create and use clean energy.

Former Vice President Al Gore said that so long as the economy remains shackled to fluctuating oil prices, the nation is vulnerable.

"This roller coaster is headed for a crash, and we're in the front car," said Gore, whose environmental work won him the Nobel Peace Prize in 2007.

Billionaire investor T. Boone Pickens said that Mexico, which exports 1.4 million barrels of oil per day to its neighbor to the north, has limited reserves and will itself need to begin importing oil within five years. That could mean the United States would have to turn to the Organization of Petroleum Exporting Countries to make up the shortfall, he said.

"I want to stop that if we possibly can," he said. "We have got to solve the problem with our own resources."

Doing so would require not only a new grid but a plan to retrofit homes and buildings to improve their energy efficiency and to increase power generated from wind and solar sources, he said.

The octogenarian said quick action is critical. "I'm running out of time," he said.

The nation's economic mess could prove helpful in advancing the cause, said John Podesta, former chief of staff under President Clinton and now the president and CEO of the Center for American Progress, which hosted the meeting.

"We can't let this crisis go to waste," he said. "These are national problems; they require national solutions."

Senate Majority Leader Harry Reid said that any such effort would need help from the federal government to succeed. He noted that development of the nation's highways and railroads both were aided by federal programs.

"Everyone should get off the kick that this program won't work if the government is involved in it," he said.