(CNN) -- A woman has been hospitalized with serious injuries to her face, neck and hands after a pet chimpanzee attacked her at a friend's home in Stamford, Connecticut. 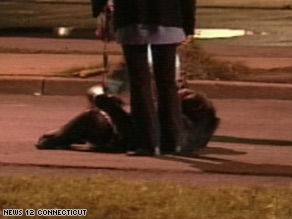 Travis is shown in 2003, when he escaped and "wreaked havoc" on the streets of Stamford, Connecticut.

Charla Nash, 55, had just arrived at her friend Sandra Herold's house when the chimp, named Travis, jumped on her and began biting and mauling her, according to Stamford Police Capt. Rich Conklin, who said the attack was unprovoked.

Herold had called Nash over to her house to help get Travis back inside after he used a key to free himself from the house.

After the attack, Herold was unable to pull the primate off her friend. She then called 911 before grabbing a butcher knife and stabbing the chimp, who police said was like a child to her.

Stamford police shot the chimp multiple times when he ripped off a side mirror and tried to enter a police cruiser, Conklin said. Travis returned to the house and died inside.

Conklin estimated Travis to be in his 20s, weighing close to 200 pounds.

The police captain also said this isn't the first interaction his officers have had with Travis -- the chimp escaped in 2003 and "wreaked havoc" on the streets of Stamford for a couple of hours.

In 2005, a different chimp escaped from California's Animal Haven Ranch and chewed off a man's nose and genitals.

During an interview after that attack, wildlife expert Jeff Corwin told CNN's Anderson Cooper that chimpanzees are "absolutely powerful."

"It's often said that an adult chimpanzee weighing in at 150 pounds is three to seven times stronger than a human being," Corwin said.

"The thing about chimpanzees is, we sort of look at them through our rose-colored cultural glasses of the cute little chimp in the 'Tarzan' movie. Those are very young chimps. Chimps grow up, they become very powerful. They are very complex in their behavior. They have a whole range of emotions, including violence and anger."