(CNN) -- Peanut butter makers not affected by the deadly salmonella outbreak linked to a Georgia peanut plant are trying to get consumers to keep buying peanut butter. It could be an uphill battle. 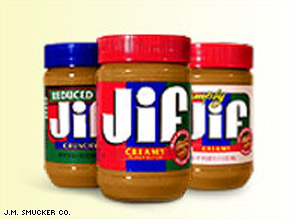 J.M. Smucker Co. wants to assure consumers that its Jif brand of peanut butter is safe to eat.

Companies such as ConAgra Foods Inc. and J.M. Smucker Co. have started running ads and offering coupons, trying to lure peanut butter customers as sales have plunged at least 20 percent since the salmonella outbreak.

Eight people have died and nearly 600 have been sickened in the outbreak. The original peanut butter recall launched weeks ago has expanded to include more than 1,000 products.

On ConAgra's Web site, a letter assures customers that the company's peanut butter is safe.

"ConAgra Foods, the maker of Peter Pan Peanut Butter, has confirmed that none of the ingredients used to make Peter Pan Peanut Butter come from Peanut Corporation of America, the company linked to the government's current salmonella investigation," the letter says. "We are extremely confident in the safety protocols."

J.M. Smucker, maker of Jif peanut butter, had a similar message for customers.

"Our Smucker's peanut butter brand and peanut butter products are safe for consumption. The J.M. Smucker Company does not purchase peanuts or any ingredients from Peanut Corporation of America," its Web site says.

The Peanut Corporation of America is under investigation by the Food and Drug Administration, and the FBI searched its Blakely, Georgia, plant on Monday, CNN affiliate WALB-TV in Albany, Georgia, reported.

Americans have shied away from peanut butter despite the FDA's assurances that major-label peanut butter in grocery stores is safe.

Watch a senator express outrage at the outbreak »

"With eight dead and almost 600 sick, it's a time to be prudent," said Dr. Douglas Powell, an associate professor of food safety at Kansas State University, which is the home of the International Food Safety Network.

There's another problem, Powell said: "None of these companies are really coming out and saying this is what we do to ensure safety. They say, 'Yeah, we test for salmonella.' But are those tests public? They're not."

Shoppers are wary because they don't know which products are safe, he said.

Tainted peanut butter and peanut paste were shipped by Peanut Corporation of America to institutions such as schools, nursing homes and prisons, not to grocery stores. But that isn't preventing consumers from playing it safe.

"If you're a parent packing a lunch and you have all the hectic things going on in the morning, is it really realistic to say, hey, before you put that peanut snack cracker individually wrapped item into your kid's lunch, you're going to go onto the Internet and check a Web site? I think that's a bit much. I think it's prudent to avoid this stuff until we see where this is going," he said.

All About Peanut Corporation of America • ConAgra Foods Inc.