After suspension for nodding at Obama, drum major quits

(CNN) -- An Ohio man who was suspended as the drum major of a band for giving President Obama a nod during last week's inaugural parade is calling it quits. 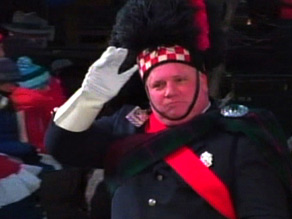 John Coleman quit his band after it suspended him for nodding to President Obama last week.

John Coleman resigned from the Cleveland Firefighters Memorial Pipes & Drums a week after the parade in Washington. Publicity about his suspension had gotten to be too much, he told CNN affiliate WEWS.

"It's come to a point where I don't want embarrassment anymore between the pipe band and myself," Coleman, who is a firefighter, told WEWS on Tuesday.

Coleman was seen during the nationally televised January 20 parade nodding toward the new president while marching with the band. A few steps later, he appeared to wave briefly.

He told WEWS that as the band was marching past the grandstand where Obama was sitting, he made eye contact with the president.

"Contact was made with our eyes both together and he smiled and waved at the band," he told the station. "And just as a gesture, I nodded my head. I gave him a slight wave and went on."

Representatives from the group did not return calls from CNN. But bandleader Mike Engle told the Cleveland Plain Dealer that Coleman was suspended because he ignored military protocol.

"We had gone over and over time and again with everyone in the band that this was a military parade," Engle told the newspaper. "Protocol and proper decorum had to be followed at all times. Unfortunately, John chose to ignore that."

Coleman had been suspended from the band for six months.

In a written statement, band manager Ken Rybka said Coleman's resignation from the group "comes as a shock and surprise."

The band has been inundated with phone calls, e-mails and messages on its Internet pages -- almost all of them critical -- since the story first broke on Monday, Rybka said. iReport.com: 'Pretty cool thing that he acknowledged the president'

"It is unfortunate that an internal band issue has raised so much discussion and ire from the general public," Rybka said in the statement. "It has disheartened me more than you can imagine."

Rybka said that he will be taking a leave of absence from the band because of the furor.

"The 'afterglow' of participating in the inaugural parade is gone," he said.