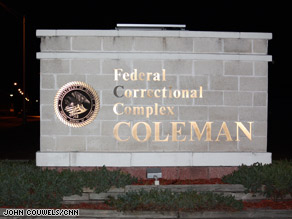 Authorities did not say what led to the fight at the Coleman Federal Correctional Complex in Sumter County.

A statement from the prison said one inmate suffered a gunshot wound, but did not say whether the person was struck by a prison staff member's bullet.

The other seven were "stabbing/shooting victims," said a spokesman for Orlando Regional Medical Center, where the inmates were taken. The hospital did not elaborate.

No prison staffers were seriously hurt in the incident, which the FBI is investigating, said Charles Ratledge, spokesman for the prison.

The fight broke out in the recreation yard of the United States Penitentiary No. 2, a high-security facility, about 2:20 p.m.

The Coleman complex consists of four institutions. The other three facilities -- another U.S. penitentiary, a medium-security and a low-security facility -- were not affected, said Bureau of Prison spokeswoman Traci Billingsley.

"The inmates ignored staff orders to stop their assaultive behavior, and shots were fired by institution staff to prevent possible loss of life," Ratledge said.

Five medical evacuation helicopters -- three from the hospital -- landed at the prison and transported the injured inmates on the 15- to 20-minute flight to Orlando Regional, hospital spokesman Joe Brown said.

The prison complex is in near Coleman in Sumter County, about 50 miles northwest of Orlando, Florida.

All About Florida • U.S. Federal Bureau of Prisons