Judge freezes assets of pilot whose plane crashed without him

(CNN) -- An Indiana judge Monday froze the assets of Marcus Schrenker, a suburban Indianapolis financial manager who authorities say tried to fake his own death by crashing his private plane into a Florida swamp. 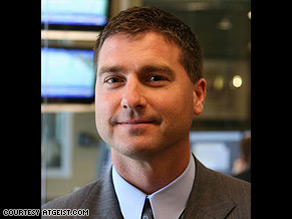 He said the order, which also applies to Schrenker's wife, Michelle, and to his three companies, is aimed at protecting investors, and is related to a receivership filing. He didn't elaborate.

According to The Herald Bulletin in Anderson, Indiana, Michelle Schrenker filed for divorce in Hamilton Superior Court on December 30. A hearing was set for February 5.

Schrenker, 38, took off alone Sunday night in a corporate plane, a Piper PA-46, from Anderson, Indiana, en route to Destin, Florida. Authorities said the Fisher, Indiana, businessman parachuted to the ground before letting the plane crash in the Florida panhandle.

The craft came down near the Blackwater River, only 50 to 75 yards from homes, said Sgt. Scott Haines of the Santa Rosa County Sheriff's Office.

Watch more about the mysterious flight »

"It is a neighborhood -- some very nice waterfront property," he said.

Military aircraft from Whiting Field, which were dispatched to intercept the plane after Schrenker reported an emergency, witnessed the crash about 9:15 p.m. CT. The crews fired flares and noticed the plane's door was open and the cockpit was dark, Haines said in a news release. They got no response.

Haines said the plane appeared to have been put on autopilot at around 2,000 feet, over the Birmingham, Alabama, area, before the pilot parachuted to the ground. Schrenker had contacted air traffic controllers, saying that the windshield imploded.

"The pilot stated that he was bleeding profusely," the news release said. "Radio contact with the plane was not able to be established after that point. When deputies located the plane at the crash site, no blood was present and the door to the plane was open."

The Childersburg, Alabama, Police Department reported that Schrenker approached one of its officers shortly before 2:30 a.m., "and said that he had been in a canoeing accident with some friends," a news release said. Childersburg is about 35 miles southeast of Birmingham.

Childersburg officers, unaware of the plane crash, took Schrenker to a hotel in nearby Harpersville. After hearing about the crash, they went back to the hotel, where they found that Schrenker had checked into the hotel under a fictitious name.

"When authorities entered Schrenker's room, he was not there," the release said.

Authorities said Schrenker checked in under a fake name, put on a black cap and fled into a wooded area.

Hotel manager Yogi Patel, who identified Schrenker on surveillance video, told CNN that Schrenker was the only guest overnight. He signed in as Jason Galouzs of Bolingbrook, Illinois, Patel said.

A hotel employee said Schrenker went up to his room, but didn't enter before leaving the building. iReport.com: Are you near the crash site? Tell us about it

Steve Darlington, manager of Anderson Municipal Airport, told CNN the plane was in fine condition at takeoff, and said Schrenker is "an accomplished pilot" who owns "a couple of airplanes" and flies regularly.

No agency has come forward to lead the probe.

"The FBI is looking into the matter, along with other agencies," said Paul Draymond, of the Birmingham FBI office.

Kathleen Bergen, spokeswoman for the Federal Aviation Administration, said several factors indicated the pilot likely left the plane before the crash: a "detailed review of radar data," the fact that the plane was switched to autopilot before it crashed, the sighting by military jet crews and the fact that the cockpit was found mostly intact with no one inside.

After the pilot alerted air traffic controllers about the alleged problems with his plane, authorities tried to persuade him to land in Pell City, Alabama, east of Birmingham, Haines said.

Schrenker also flew an acrobatic plane, and made a video featured on a YouTube site. A message preceding the video warns, "No pilot should attempt this stunt. You will get yourself killed. Pilot specially trained to fly unlimited acrobatics and shows."