WASHINGTON (CNN) -- JetBlue Airways and two TSA screeners will pay $240,000 to settle an Iraqi man's claim he was denied access to a flight until he covered a T-shirt that read in English and Arabic, "We Will Not be Silent." 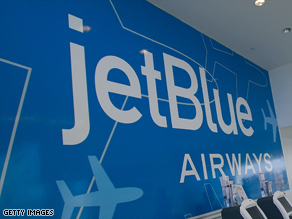 JetBlue and two TSA screeners settled a lawsuit for $240,000, but denied any wrongdoing.

In the settlement, JetBlue and the TSA screeners deny any wrongdoing, saying they only wanted to resolve the 2½-year-old federal lawsuit.

But Raed Jarrar, an Iraqi who immigrated to the United States three years ago, cast the settlement as a victory, saying the payout would discourage airlines and airport security officials from imposing restrictions in the future.

ACLU attorney Aden Fine, who represented Jarrar, also called it a victory. "A $240,000 award should send a clear and strong message to all TSA officials and to all airlines that what happened here is wrong and should not happen again," he said.

TSA spokesman Christopher White, while noting that the TSA was not a party to the suit, said "There is absolutely no intention to take disciplinary action against the employees involved."

The incident occurred August 12, 2006 -- two days after the United Kingdom revealed a plot to bomb planes to the United States had been foiled. In response, the United States imposed a ban on carry-on liquids, and raised the threat level at airports.

Jarrar, now 30, said he was attempting to travel on JetBlue flight 101 from New York's John F. Kennedy International Airport to Oakland, California, when he was approached by TSA officers. The officers told him he'd have to cover his T-shirt.

"When I asked why, one of the TSA officers said, 'Coming into an airport while wearing a T-shirt with Arabic letters on it was equivalent to going into a bank while wearing a shirt saying, 'I am a robber,' " Jarrar said.

Jarrar said he originally refused to cover up the shirt, first asking to speak to a supervisor, and asking if there was a law prohibiting Arabic shirts.

"I said, 'I think as a U.S. resident and taxpayer, I think it's my constitutional right [to express myself],' " said Jarrar, adding the T-shirt's message was not threatening.

Jarrar said he finally relented when it became obvious he couldn't get on the plane without complying.

The officials purchased a T-shirt for him to wear, he said.

"They had actually a discussion in front of me. One said, 'Let's buy an "I [heart] New York" shirt.' And another said, 'No, we can't take him from one extreme to another.' "

Jarrar said they eventually bought him a "generic gray" T-shirt with the words "New York" on it. "They tried to say this is a compromise ... I said, 'It is not a compromise, you are denying me my rights,' " Jarrar said.

Airline officials also changed his seats without consulting him, forcing him to to sit in the back where flight attendants kept an eye on him, Jarrar claims.

According to court documents, TSA screener Trotta said he remembers Harris telling Jarrar he "had perhaps not made the best choice of clothing" given the events two days earlier. But "at no point in time did he ever request or order that the passenger change his shirt or suggest that his failure to do so" would keep him off the flight.

Jarrar said he is disappointed the TSA and airline did not apologize to him.

In a written statement to CNN, JetBlue said it was pleased with the settlement.

"At no time did anyone from JetBlue ever say he could not board the aircraft unless he changed his T-shirt," Baldwin said.

ACLU attorney Fine said Jarrar did not sue TSA directly because of "legal considerations." "It's much more difficult to sue a government agency than it is to sue the direct government employee that committed the unconstitutional act," he said.

But the JetBlue settlement should accomplish the same goal, he said.

Jarrar said the slogan on the T-shirt -- "We Will Not Be Silent" -- originated in Germany as a campaign against the Nazi repression. He said artists in New York have printed it in various languages.