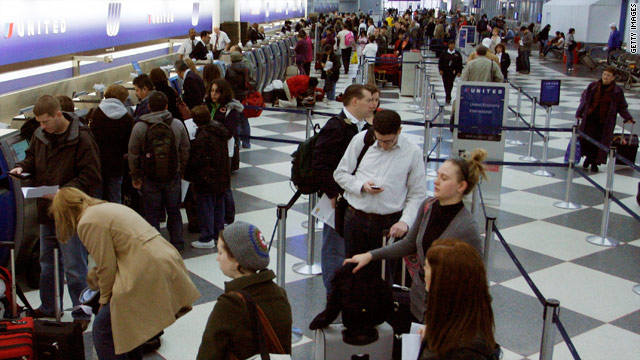 Passengers wait to check in Wednesday at the United Airlines terminal at O'Hare International Airport in Chicago, Illinois.
STORY HIGHLIGHTS

(CNN) -- Travelers across the United States arrived en masse at airports, hit the roads and boarded trains Wednesday, a day before the Thanksgiving holiday.

"It's actually surprisingly not as much of a disaster as I thought it was going to be," said Rafi Samuels-Schwartz, 25, who was waiting at New Jersey's Newark International Airport to board a plane to Minneapolis, Minnesota -- a flight that was on time, he added.

"It wasn't pandemonium, it wasn't a scene from 'Independence Day,' " he said. "I thought it was going to be considerably worse."

The number of people traveling this holiday weekend is expected to increase slightly, compared with last year, although the number traveling by air is expected to decline, according to the American Automobile Association, a motorist and traveler organization.

The AAA, which surveyed 1,350 American households, projects that 38.4 million people will travel over the holiday weekend, up from 37.8 million last year.

However, the number traveling by air is expected to decline to 2.3 million, the automobile association said. In 2008, 2.5 million people traveled by plane for Thanksgiving.

AAA said the slight increase in the number of Thanksgiving travelers from last year reflects improved consumer confidence as well as "a growing sense among many consumers that the worst of the global economic crisis is behind us."

Citing excess baggage fees and surcharges for jet fuel, along with delays and flight groundings, AAA spokesman Geoff Sundstrom said it's "not a very friendly environment this decade for the airline industry or the airline traveler."

David Ross, who was at O'Hare International Airport in Chicago, Illinois, with his wife and four children to catch a flight to Cancun, Mexico, offered some advice.

"You have to be calm and collected when you come to this airport, especially on a day like today," Ross, from Libertyville, Illinois, told CNN affiliate WGN.

However, by 1 p.m. ET, delays at the country's airports appeared to be minimal, according to the Federal Aviation Administration's Web site. It reported that some arriving flights at the airports in Philadelphia, Pennsylvania; Newark, New Jersey, and at LaGuardia Airport in New York were delayed because of low cloud ceilings.

"My flight's on time, so I'm pretty happy about that," added Warman, who was headed to Miami, Florida, to see family.

At Washington's Reagan National Airport, the morning lines seemed like those of any other day. "It's deserted," one woman told CNN affiliate WJLA. "There's nobody here."

Of course, the bulk of Thanksgiving travelers will be going by car, AAA said -- about 33.2 million.

"I'm going to probably end up sitting in traffic for five hours," said Jack DeManche, 21, a student at the University of Massachusetts at Amherst, who plans on driving home Wednesday night to Uxbridge, Massachusetts. The drive is usually only about two hours from Amherst, but DeManche -- a resident adviser at the school -- won't be able to leave until he closes one of the student residence halls.

"I have to work until at least 6 p.m., and then I have to pack up," he said, adding that in years past, the drive has taken more than twice as long as it does on nonholiday weeks. But even so, he said, he'd rather brave the drive home Wednesday night than Thursday morning.

"I'd so much rather get home tonight," he said.

In Oklahoma, the state's department of public safety said multiple accidents had shut down Interstate 35 in both directions around Billings.

In California, an accident on the Golden Gate Bridge prompted authorities to close the bridge for a time, snarling traffic. The bridge reopened shortly after noon (3 p.m. ET), but Golden Gate Bridge District spokeswoman Mary Currie said the backup of traffic would take some time to clear.

About 2.9 million people will travel by train, watercraft, bus or a combination of transportation modes, and 2.3 million will travel by air, the automobile association predicted.

Jennifer Burrell, from Tucker, Georgia, said she, her husband and their two daughters were driving Thursday morning to just outside of Asheville, North Carolina. They'll return Sunday.

She said she wasn't expecting traffic on the way up, but "it always gets heavy" on the way back.

Of course, some Americans are not traveling at all.

Heather McKinnon of Broomfield, Colorado, said she is staying home with family for Thanksgiving.

"I don't like to fly and really rarely like flying on holidays," she said, adding that she would consider driving.

"I know what it's like going through the airport," she said. Plus, she added, "everything I love is here."

CNN's Taylor Gandossy and Augie Martin contributed to this report.