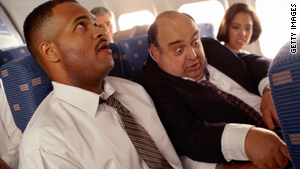 When dealing with the Talkative Airplane Seatmate, experts say you should be polite but firm.
STORY HIGHLIGHTS
RELATED TOPICS

(CNN) -- All I wanted to do was to fall asleep in my tiny seat on the last leg of a grueling day of air travel, when I was cornered by the Talkative Airplane Seatmate -- a species oblivious to yawns and one-word answers.

My chatty neighbor was a forklift accident expert -- a job he described in great detail as my eyelids grew heavier and heavier.

I mentioned that I was barely functioning after an 11-hour flight from China to California, followed by a six-hour layover at San Francisco International Airport.

Still, he recounted his life story, showed pictures of his family and listed his hobbies. I finally fell asleep, but when I opened my eyes, he opened his mouth again.

Most travelers have crossed paths with the Talkative Airplane Seatmate at some point, discovering that even lackluster responses and chilly body language can't stop the stories or personal questions from coming.

"As soon as the guy beside me sat down in the aisle, I knew he was itching to strike up a conversation. I avoided eye contact like the plague, but he wasn't a master of social cues," wrote an air traveler this month in a post on Flightsfromhell.com, a Web site where passengers vent about their horrible flight experiences.

"I grabbed my book and made the mistake of turning my light on, an action that inspired him to break the ice. Immediately, he was completely facing me, leaning into my seat and asking me questions."

Twenty-four percent of business travelers like talking to people on planes, according to a survey by the corporate travel management company Egencia. When trying to signal they want to be left alone, half said they start reading, 38 percent listen to music and 15 percent pretend they are sleeping.

Gregg Rottler, founder of Flightsfromhell.com, said he tries to stop talkers in their tracks by bringing a bag full of newspapers and reading throughout the flight.

Randy Petersen, editor and publisher of Inside Flyer magazine, flies up to 70 times a year on business. He said his favorite defensive strategy is to put on headphones immediately.

"I never want to be a curmudgeon," Petersen said. "[But] there are plenty of people out there who find 11 o'clock at night on the red-eye from LAX to JFK to be a perfect time to be talking. I take the red-eye because I need to get some rest before I go immediately to a meeting."

Why do these overly aggressive talkers do it?

"I think most of them are clueless, to be honest," said etiquette expert and author Anna Post, who is also a spokeswoman for the Emily Post Institute.

"They're not thinking about how their chatting could be affecting someone else. They're just thinking that they want to talk, so they're talking."

Some also may be trying to network -- especially during tough economic times.

If you're not sure how much to talk with your neighbor or are faced with a Talkative Airplane Seatmate, Post offers the following tips:

To chat or not to chat? There is no obligation to talk with the stranger seated next to you, but some eye contact, a smile or a nod can serve as basic acknowledgment of that person. If you'd like to start a conversation, remember that some people may be shy or exhausted.

Stick to basic subjects. "Avoid things that are overly personal," Post advised. "Avoid hot button things like politics. ... You're in a small space, you don't want to set off any fuses." Good topics? Your destination, the movie that just played or the book the person is reading.

Early clues that your neighbor has had enough. When people begin answering questions with a question or respond with "uh huh, sure, mmm hmm," it's time to back off, Post said.

Signaling you've had enough. "I like to do the long, slow unwinding of my iPod ear buds," Post said. "It gives them plenty of time to recognize where I'm going without just cutting them off short. Then when they take a break, I say it's been great chatting, I'm going to turn on the movie for a bit or I'm going to go back to my book now."

Be polite but firm. Post advises against telling the person directly that you don't want to talk. Instead, turn your attention to another task such as reading or doing work.

Networking in the air. Looking for business contacts is fine, as long as you're not pushy. Being overly aggressive can damage a potential business relationship.

Talking with a colleague. When sitting next to a co-worker, a boss or someone you supervise, chat at least a little, Post said. "If they're senior to you, follow their lead. Let them set the tone for how much to chat. If you're on more equal footing, it's going to be a bit more give and take."