Why does one day less cost three times more?

(Tribune Media Services) -- Alexandra Seldin prepays for a rental car through Alamo's Web site. But when her flight is canceled, and she arrives a day late, the company charges her three times more than it originally said it would. Is it allowed to do that? And is there any hope for a refund? 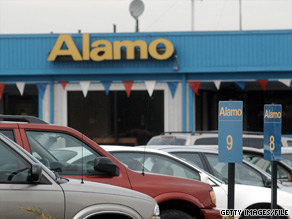 A customer's late arrival cost her an additional $1,116 for her car rental.

Q: My car rental company has more than tripled the rate it charged me, and I don't know what to do. I had prepaid $390 for the car through Alamo's Web site. When my flight was canceled, I called Alamo to tell it I could not get the car until the next day. I was told that my reservation would be held for 24 hours.

I picked up the car the next day and returned it on time. When I dropped off the rental, a representative said the computer system was down. But when I got my bill the next month, there was an additional $1,116 charge because of the late pick up.

I believe this additional charge to be unfair and am requesting a refund. I believe Alamo should honor its promise of the prepaid amount as well as the representation that my reservation would be held for 24 hours. Can you help?

A: So Alamo is charging you another $1,116 even though you rented one of its cars for one day less. Where's the logic in that?

The answer: It's airline logic. Air carriers have figured out a way to quadruple the price of a ticket depending on the time you bought it. So a "walk-up" fare purchased at the last minute can be hundreds, and even thousands, of dollars more expensive than an advance-purchase fare. But you're getting the same seat.

You prepaid for your rental weeks in advance -- kind of like an advance-purchase ticket. But when you didn't show up as expected, the system reset your rate, charging you the more expensive "walk-up" rate.

The computer problems should have been a showstopper. When a representative says the system is down, you need to get a receipt, even if it's handwritten. That way, if the company tries to double-dip, you can dispute the charge using the invoice as evidence that your bill was paid.

Even if you have assurances that you won't be billed again, it's important to monitor your credit card. A car rental company isn't going to send you an e-mail letting you know that you're being charged more. It's just going to quietly take it off your credit card. As soon as you see a questionable charge on your card, mention it to the company or dispute it with your credit card company.

I think you would have won a credit card dispute, by the way. You would have needed to show the prepaid voucher as proof that you had already paid for the rental, and the credit card company should have sided with you.

I suggested you write a brief, polite e-mail to Alamo, asking it to reverse the charges. The response? A snippy note that said, "Any changes to the basis of the reservation makes the rate subject to change," and adding, "We are disappointed that this policy is a source of dissatisfaction for you." Alamo denied your request.

Like you, I was unhappy with the denials by phone and e-mail. So I contacted Alamo for you. It promptly refunded the $1,116 it should have never charged you in the first place.

Christopher Elliott is the ombudsman for National Geographic Traveler magazine. E-mail him at celliott@ngs.org.