Airport screeners get kit to test for dangerous powders

WASHINGTON (CNN) -- The Transportation Security Administration is giving its airport checkpoint officers a new tool: a kit to test for explosive powders. 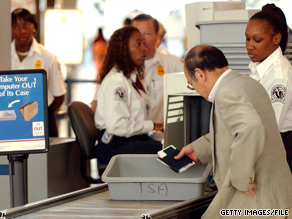 If the X-ray machine detects a potentially hazardous powder, a sample will be mixed with a solution for testing.

The TSA said Tuesday it is deploying the kits to all U.S. airports this week, but said it will have little noticeable impact on passengers. Travelers can still board planes with powders such as baby formula, makeup and medicines.

"The majority of passengers won't notice any difference in checkpoint procedures," said TSA spokeswoman Kristin Lee. "This is just one additional layer of security that helps bolster our explosive detection capability."

While there is no specific threat at this time involving explosive powders, the new kits will help protect against the possibility that terrorists could board a plane and use the powder as a component in an improvised explosive device, the TSA said.

In practice, the initial screening process will not change. Passengers will still pass their carry-on bags through an X-ray machine. But if the X-ray machine detects a potentially hazardous powder, the powder container will be removed, a small sample will be taken and the sample will be mixed with a solution for testing.

If powder does need another level of screening, it will be done in a way that avoids contamination of the product, and passengers will be made aware of the test, she said. Any powder determined to be a potential threat will not be permitted into the secure area.

In the past, transportation security officers had to rely on TSA explosive specialists or local law enforcement to check out powders that required additional screening.

Three years ago, the TSA and its counterparts overseas imposed severe restrictions on the amount of liquids passengers could carry on planes after British authorities uncovered a plot to use flammable liquids to destroy at least seven transatlantic airliners. Those restrictions remain in place.

On Monday, a British court convicted three men in the 2006 plot.