WASHINGTON (CNN) -- Beginning Saturday, many air travelers will be asked their birth dates and genders when making airline reservations. 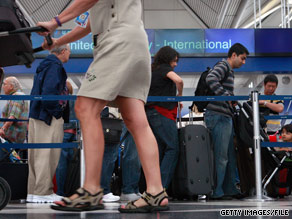 The new travel rules are the latest "visible" expansion of the Secure Flight program.

It's the latest "publicly visible" expansion of Secure Flight, a program that transfers responsibility for checking air passengers' identities from the airlines to the federal government, the Transportation Security Administration said.

The change keeps the agency on track to assume responsibility for ID checks on all domestic flights by early next year, according to the TSA.

Currently, the airlines check passenger identifications against lists of suspected terrorists. But the 9/11 Commission said the job was better suited for the federal government, which compiles the "terror watch lists." Government control increases security, according to the TSA, while reducing the number of instances in which innocent people are mistakenly confused with possible terrorists having similar or identical names.

In May, the federal government began the first public phase of "Secure Flight" when four small airlines began asking passengers to provide their names, as the names appeared on the government-issued IDs they would be traveling with, when making reservations.

Since then, additional airlines have begun asking for full names, TSA spokeswoman Sterling Payne said, though she declined to say how many airlines are participating for security reasons.

The new change requires travelers to provide three pieces of information when making reservations: the passenger's full name as it appears on the government-issued ID they will be using, their birth date and their gender. The airline will transmit that information to the TSA, which will compare it to a "no-fly" list of people prohibited from flying or a list of "selectees" who can fly after they pass additional physical screening.

If passengers are not asked for this addition information, they should not be concerned, as it will not affect their travel, the agency said.

Early efforts to create the Secure Flight program were beset by problems, including program delays and complaints of privacy breaches. Finally, in 2006, after the TSA spent more than $130 million and four years on the system, then-TSA Director Kip Hawley ordered a complete overhaul of the program and dropped plans to check passengers' names against commercial databases, one of the most contentious features of the program.

"Secure Flight is a key tool in confirming that someone identified as a 'No Fly' does not receive a boarding pass," TSA acting Administrator Gale Rossides said in a statement Wednesday. "Secure Flight will make travel safer and easier for passengers."