(CNN) -- Complete this sentence: In the event of a loss of cabin pressure ... 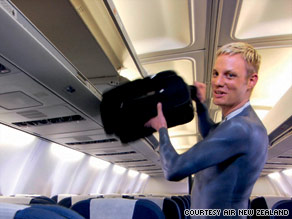 Air New Zealand crew members "bared all" for their preflight safety video to show they have "nothing to hide."

If you guessed, "oxygen masks will drop from above," you are not alone. Because the federally mandated preflight safety announcement is about as well known as the pledge of allegiance to many travelers, they immediately tune it out. So airlines are getting creative to grab passengers' attention.

According to a 2001 National Transportation Safety Board study, 69 percent of passengers who completed the survey did not watch the entire safety briefing because they had seen it before or because they considered it common knowledge.

How do airlines compete with more entertaining options, like texting or leafing through Sky Mall magazine? They are employing a variety of creative techniques, from naked cabin crew members to witty cartoons.

Watch videos of the creative tactics »

In late June, Air New Zealand rolled out a decidedly different approach to the preflight safety video for its domestic flights, and it doesn't leave much to the imagination.

As part of its "Nothing to Hide" marketing campaign, which highlights the carrier's lack of fees compared with its so-called low-cost airline competition, the airline professionally body-painted five naked airline employees to perform the safety video with a pinch of cheeky humor, literally.

"We wanted to point out we have nothing to hide, and there are no surprises," said Steve Bayliss, general manager of marketing for the Auckland-based carrier.

Set to a poppy song by New Zealander Gin Wigmore, the 3½-minute video debuted with much fanfare and a warm reception, Bayliss said.

"It was overwhelming, with 99.9 percent of the reaction positive," Bayliss said. "What it has done for the airline was quite amazing. It was really innovative and shows we are up to trying new things."

Atlanta, Georgia-based Delta Air Lines made an attention-grabbing foray in May 2008 when it introduced a seductive flight attendant, nicknamed "Deltalina" by her fans because of her resemblance to actress Angelina Jolie, for its preflight safety video. The video has been viewed on YouTube more than 1.3 million times.

But are passengers paying attention? While there is no hard data, Delta spokeswoman Susan Elliott says yes.

"We know they are paying attention because they are talking about it," Elliott said. "The response from customers is overwhelmingly positive."

Delta will introduce a new version of the video in 2010 when the airline's merger with Northwest Airlines is completed. As for "Deltalina," Elliott said only that she will "very likely play some role" in the new video.

Companies must tailor their marketing efforts to our shrinking attention spans, said Larry Chiagouris, a professor of marketing at Pace University. Whoever delivers the most concise and compact information wins the consumer over, he said.

"We are now accustomed to getting our information fast and quick; as a result, we don't have the staying power to sit and listen," Chiagouris said.

Cait Poynor, an assistant professor of marketing at the University of Pittsburgh, said that as people's attention spans grow more divided, they can focus on only one thing at a time, making a company's goal to attract your attention more difficult.

Poynor and Stacy Wood from the University of South Carolina are researching what companies are doing to draw people's attention to information they feel they already know.

"We don't pay attention because we already feel like we know everything that's being said," Poynor wrote in an e-mail to CNN. "We're unlikely to give our precious attention to that safety video."

As of Tuesday, Air New Zealand's safety video had racked up more than 4.4 million views on YouTube, giving the airline priceless viral buzz. But Chiagouris "guarantees" we won't see this type of buzz again for an airline safety video and believes that the standard preflight briefing won't be going away.

Other airlines that have gone the creative route to spice up the monotonous preflight safety videos include Virgin America and its sister airline, Virgin Atlantic. They use sassy cartoons to explain the safety procedures.

Southwest Airlines' flight attendants, who do not have video equipment on board, occasionally sprinkle their instructions with quips: "If you are traveling with two or more children, please take a moment now to decide which one is your favorite. Help that one first, and work your way down." In March, flight attendant David Holmes gained some fame when a passenger uploaded his preflight safety announcement rap.

British charter airline Thomson Airways has kids brief passengers about safety requirements. Thomson said in a news release that its internal studies found a 15 percent increase in attention from passengers.

"By doing this, they're hoping they can make consumers think, 'Hey, there might be something new here. I should pay attention,' and get just a little bit more of their resources," Poynor said.

"The grand corporate brand is over," he said, referring to the buttoned-up appearance that airlines like British Airways uses.

As for the future, Bayliss remained mum about what Air New Zealand will do next. But it's unlikely their employees will bare all again.

"If we do a plain old traditional video, our consumers will hang us up to dry," he said. "The challenge is to come up with something to interest them."