ORLANDO, Florida (CNN) -- He looks like President Barack Obama, speaks like him, and even gestures like him, but he is not exactly the president of the United States. 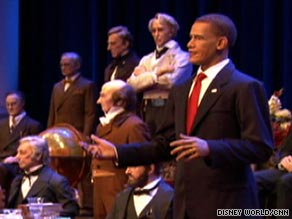 The President Obama audio-animatronic figure "speaks" at the Hall of Presidents exhibit at Disney World.

This president is an audio-animatronic Obama surrounded by the 42 other U.S. presidents at Walt Disney World's newly revamped Hall of Presidents in Orlando, Florida.

Disney gathered a team of what it calls "Imagineers," each trained in various disciplines such as artistry, design and engineering, to update the attraction that has been around since 1971.

It's hard to believe the figures are not real people and, according to Disney officials, that's the goal.

"The magic of the show is actually being able to see all of the presidents throughout history on this stage together," said Eric Jacobson, senior vice president of creative development at Walt Disney Imagineering. "We have to use our magic to bring that together to make that happen."

Watch the animatronic Obama in action »

Disney calls the new President Obama figure "the most dynamic figure Disney has ever created." "We're very proud of the technological advances that allow this to make him come to life so realistically," Jacobson said.

Imagineers traveled to the Washington, D.C., to record Obama's voice for the show. They also worked with White House staffers to make sure his wardrobe, hair and mannerisms were portrayed as accurately as possible.

"He's very tailored and very well-dressed all the time so that's what we were trying to achieve, and I think we did," said Janice Jones, a costumer at Walt Disney World.

"Well, it's a great pressure of course to completely do an accurate job of somebody that's in the media so often," Edwards said.

She used an array of pictures and video of the president to capture even the slightest facial expression.

The retitled show is called "The Hall of Presidents: A Celebration of Liberty's Leaders," and it focuses on the bond between the president and the people.

Presidential historian Doris Kearns Goodwin consulted on the project and said people who see the show should feel a greater sense of closeness to the presidents.

"These presidents are human beings with their own need to withstand adversity, sometimes to conquer fear," Goodwin said. "Yet the other side of it is that mystery of leadership. The best ones are able to give confidence and hope to the American people themselves."

While the Hall of Presidents has been around for nearly 40 years, Disney officials said refreshing the attraction during this moment in history will make the exhibit remain relevant for new audiences.

"This is a great chance to update the show and make it even more spectacular and technologically advanced then it ever has been," Jacobson said.