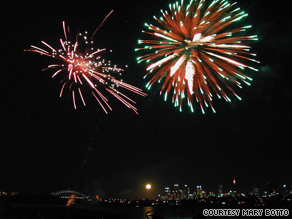 The American Society of Sydney, Australia, helps put together a July Fourth celebration on Sydney Harbour.

There may not be international landmarks at your neighbor's Fourth of July barbecue, but for Americans living abroad, they're the perfect backdrop when celebrating independence.

To global Yanks, it's just as important -- if not more so -- to throw an Independence Day party that feels just like home.

From Buenos Aires, Argentina, to Rome, Italy, Fourth of July soirees are happening on Saturday in nearly every corner of the world. So if your globetrotting lands you in one of these cities over the weekend, consider squeezing an Independence Day celebration into your itinerary.

Canada Day occurs a mere three days before the Fourth, and our neighbor to the north lights up the sky for both.

Held on the shores of Lake Ontario at the amusement park Ontario Place in Toronto, the Grand Finale for the Canada Dry Festival of Fire is an extensive fireworks display that draws between 15,000 and 20,000 people each year.

Choreographed to a surprise playlist, "the fireworks actually detonate to the beat of the songs, which are voted on by the listeners of [local radio station] CHFI," said Ontario Place spokesman Nick Kondrat.

Tickets include an all-day pass to the park, so be sure not to miss the eclectic entertainment, like "Salsa at Ontario Place," featuring live salsa music, dance competitions and lessons.

Time Out London lists this event as a "must-do" for Independence Day. Standing out from a slew of holiday gatherings, the 7th annual Fourth of July picnic, hosted by the American expatriate community, begins at 2 p.m. at London, England's, Battersea Park.

To keep the kids happy, there will be red, white and blue bouncy castles as well as balloons and face-painting, according to the group's Web site.

For the adults, plenty of barbecue will be available for purchase in addition to two fully stocked cash bars. Between softball games and paddleboat rentals at the nearby lake, there's plenty to do for the whole family. For a grand finale, a laser fireworks display starts at 9:45 p.m.

Even better: Admission is free all day.

A blowout event planned a year in advance, the American International Club of Rome's 20th celebration is a patriotic tribute: potato sack races for the kids, swing-dancing lessons with live music and all the s'mores, hot dogs and hamburgers you can stand, said the club manager and event coordinator, Nina Farrell.

"When you're away from home, it's really nice to get together and celebrate and be a little bit American," Farrell said.

The celebration will kick off at 5 p.m. with Americans and Italians alike at Marymount International School, ending at midnight with the crackling of sparklers. (Sorry, no fireworks allowed on the school grounds.)

Red, white and blue down under

Mary Botto believes it's the little things that help a person become acclimated, and the Fourth of July celebration the American Society of Sydney, Australia, helps pull together is one of them.

Botto, the society's president, said this year's party will be held at the Hunters Hill Sailing Club, right on Sydney Harbour. The organization stays true to an American theme, from the food to the fireworks.

The one piece of American tradition Botto's group can't replicate is warm weather: July is winter in Australia, so most of the festivities are indoors, except the fireworks, which start around 6 p.m.

Everyone is welcome, and locals take part in the fun. "Australia Day here is huge and I think Australians really respect the fact that we still celebrate even though we're not in our home country," Botto said.

Tickets can be purchased at moshtix.com.au.

It doesn't take a bartender to know that beer is a top seller on Independence Day, and that's not just in the United States. Crack a cold one in Buenos Aires, where a burgeoning pub crawl is poised to take over the Paris of South America.

Between the drinks, a diverse group of participants and the four frat boys from Georgia running the show, you'll feel right at home. The company, 12th Gate Inc., has spent the past two years rounding up tourists, expatriates and the stray 70-year-old into one big, pub-crawling group.

Saturday marks their first Fourth of July event, and they've pulled out all the stops. "We've been living here for awhile, and we miss home," said marketing and events planner Will Aquino. "We have the means to throw a great party, and we are."

Instead of the usual pizza, the owners have upped the ante to provide more festive fare: hamburgers, hot dogs and red, white and blue Jell-O shots. You can even get a commemorative T-shirt with the $13 ticket price, which covers an hourlong open bar, food and transportation to three bars throughout the city.

There won't be any fireworks, but participants will be supplied with sparklers and American flags. To secure a reservation, head to the 12th Gate Web site.