Travelers returning from Mexico should be cautious

(CNN) -- As the swine flu outbreak escalates across the globe, U.S. travelers returning from Mexico are wondering what to do when they come home. 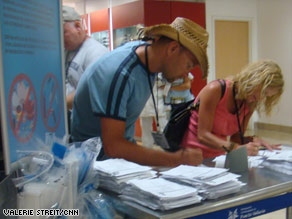 Travelers leaving a Mexican airport fill out questionnaires about their health.

On Wednesday, Christine Kovar of San Francisco, California, returned from a vacation to Nuevo Vallarta, Mexico. She said she wasn't sure whether she should attend work or stay home.

"I feel fine," said Kovar. "It will be the discretion of my boss whether I go back to work."

The Centers for Disease Control and Prevention in Atlanta, Georgia, is advising U.S. travelers back from Mexico with at least two of the swine flu symptoms to stay at home and avoid public places upon return. Symptoms of swine flu, also known as 2009 N1H1, can include a fever, sore throat, cough, chills, headaches and runny nose.

People with symptoms should report to a health care provider or local health department and provide itinerary details and symptoms, according to the CDC. If infected, the swine flu is contagious for up to seven days.

People who aren't sick should continue to work and use normal precautions like washing hands, according to the CDC. They should monitor their health for seven days.

"As long as they aren't presenting any flu-like symptoms, there is no reason why they can't continue to do things that they normally would," said Llelwyn Grant, a spokesman for the CDC.

Meanwhile, the death toll from swine flu continues to climb. On Thursday, the World Health Organization reported 236 cases of swine flu worldwide. In the United States, the CDC said it confirmed 109 cases of swine flu, or 2009 H1N1, in 11 states, an increase of 18 from its previous total. On Wednesday, the WHO raised the pandemic threat level to 5 on a six-step scale

These numbers are causing alarm among the public, as schools and businesses try to contain the disease and protect the health of others. Some companies are erring on the side of safety, telling employees who returned from Mexico to stay at home for a few days.

One university in Pennsylvania barred nearly two dozen students back from Mexico from attending graduation. More than 100 schools across the country have shut down. Greenville County School District in South Carolina shut down on Thursday to clean the buildings and busses when 18 students reported flu-like symptoms after a band trip to Disney World in Florida. School officials are awaiting the test results of the children.

"We are being proactive and trying to take [the] right precautions," said Oby Lyles, spokesman for the Greenville County School District.

"If you aren't sick, make sure you are practicing the common sense precautions," said a spokesman at the New York State Department of Health. "Wash your hands. Cover your mouth when you sneeze."

In addition to advising ill U.S. travelers returning from Mexico to stay confined, government officials are turning to the travel industry for help, particularly air travel.

The CDC is advising airline crew members who have arrived from domestic and international areas affected by the swine flu to be on the lookout for ill passengers. Airlines have been advised to stock the planes with gloves and face masks in case of an emergency.

The CDC said airline crew members need to ask passengers who appear sick to be quarantined at one of the CDC's 20 locations across the country.

It's been smooth sailing at U.S. airports, several passengers say. There have been no nationwide questionnaires being issued at the airports, according to a spokeswoman at U.S. Customs and Border Protection yet.

In contrast, at some Mexican airports, travelers are asked to fill out forms asking about his or her health, passengers interviewed say.

As of Friday, the CDC was recommending U.S. travelers avoid all nonessential travel to Mexico.