After a layoff, is it time to take off?

(CNN) -- Don Shows was a computer geek until he lost his job and took a road trip. 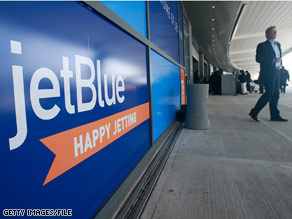 JetBlue promises to refund some tickets purchased before a traveler is laid off from a job.

While the 56-year-old from Dayton, Ohio, was away on his eight-day post-layoff adventure, he decided he really wanted to be a photojournalist.

"I ran into some interesting situations when I was out touring around the backcountry" of the Midwest, he said. "The road map is handy, but sometimes the road you're looking for is not there."

Stories like Shows' are more common these days. The unemployment rate was at 7.6 percent in January, and, strange as it may seem, at least one travel company, an airline and a travel-bag maker are now catering to the layoff crowd -- both the recently let go and the future unemployed.

For those who buy a plane ticket before they get the ax, JetBlue is offering to refund fares. The JetBlue Promise promotion is good for customers laid off on or after February 17 and applies to ticket purchases made between February 1 and June 1.

The program is designed to appeal to people who haven't been downsized but worry they might be, said Alison Croyle, a spokeswoman for the airline.

"It's something that we felt would provide an advantage to customers who otherwise might be too stressed to book future travel plans," she said.

Then there's the already-laid-off demographic.

On some packages, Intrepid Travel is giving a 15 percent discount to people who've recently been let go.

The deal, with the tongue-in-cheek title, "Laid off? How about taking off?" has gotten a few dozen takers in the two months it's been offered, said Leslie Cohen, spokeswoman for the travel company.

Cohen said the discount is designed to give people a chance to clear their heads during a tough transition. Some of the deals start at less than $1,000, she said.

The company is "not suggesting you use your life savings," she said. "It's really just a chance to catch your breath and see something else and come back in a little bit of a different frame of mind."

For those looking to hit the skies on the job hunt rather than escape it, SkyRoll, maker of a $149.99 garment bag, says it's giving a discount.

"If you recently lost your job and need to travel for an interview, we will take 50 percent off the price of a SkyRoll to help you arrive looking your best," the company says on its Web site. To get the discount, SkyRoll requires customers to e-mail the company a layoff notice.

Travel discounts like the one from Intrepid may be great for unemployed people who have hefty savings accounts or large severance packages, but the program also could prey on the unemployed, said Madeline Hughes, who runs a consulting and outplacement group in Denver, Colorado.

The cost of a big trip "could be lunch money for somebody for the next six months," she said.

Hughes tells her clients who are laid off they need to come up with a career plan -- and quickly -- because the job market is so competitive.

If a person truly has a thick enough checkbook to afford a post-layoff vacation, Hughes said she would tell the person to send out plenty of resumes before hitting the beach.

"If you really do want to get away, then at least get somewhat of a plan so when you're on vacation you're not fretting about what you're going to do when you get back," she said. "People can't relax if they're afraid and they don't have a plan and they're sort of panicked."

Daphne Domingo, a life coach in Seattle, Washington, said people who've been laid off should take vacations so they have time to reassess their lives -- but they should gauge the scope of their travel on their savings account.

"Be a tourist in your own town" if you don't have the money to travel, she said. "That way, you can save money on accommodations."

Domingo and Hughes said all job seekers should weigh their situations individually.

Jonathan Hagelstein, a 32-year-old from New York, plans to use Intrepid's package to travel to Africa and Europe for nearly a month. This is the second major trip he's taken since being laid off from a finance job in June. But Hagelstein says he's a "compulsive saver" and wants to make use of the free time while he has it.

"Time is something that you can never get back. You can always earn more money," he said. "I'm not getting any younger. ... This is an opportunity -- I feel -- of a lifetime."

With each trip, he hopes the job market will be better when he returns. He said he has no leads on a job.

He said he hadn't taken a substantial trip during the decade or so he worked in information technologies at LexisNexis, a database and information company.

So he saw the layoff partly as a gift of free time. Shows said he has a stable enough income since he is also a retired police officer. But he said his car trip was relatively cheap. The adventure took him to six states and cost less than $1,000, he said.

Plus, it helped him reconnect with his passion.

"If I could do anything I wanted to do in life, it would be to take the camera out and go out to talk to people and get stories," he said.

Shows said he plans to take photojournalism classes at a local community college this spring.